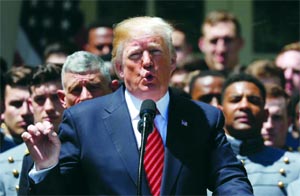 Agencies, New York/Washington U.S. President Donald Trump on Tuesday criticized the leak of more than 40 questions that Special Counsel Robert Mueller wants to ask him as part of a probe into Russia’s alleged election meddling and possible collusion by the Trump campaign. As negotiations continue over whether Trump will sit for an interview, the New York Times obtained a lengthy list of questions Mueller and his team have prepared for the president. “So disgraceful that the questions concerning the Russian Witch Hunt were ‘leaked’ to the media. No questions on Collusion,” Trump wrote on Twitter. “It would seem very hard to obstruct justice for a crime that never happened!” Mueller’s investigators read the questions to Trump’s lawyers who compiled them into a list, the New York Times reported on Monday. The newspaper said it obtained the document from a person outside Trump’s legal team. Trump’s lawyers met with Mueller last week to discuss a possible interview with the president, according to the Wall Street Journal, which also reported on the potential queries. Representatives for the Mueller’s office declined to comment and Jay Sekulow, a lawyer for Trump, also had no comment. Reuters could not confirm the published accounts. The list of at least four dozen questions includes ones on Trump’s ties to Russia and others to determine whether the president may have unlawfully tried to obstruct the investigation, the Times reported. Savannah Law School professor Andrew Wright, who served in President Barack Obama’s White House, said it was difficult to know who would have leaked the questions and why. “It’s hard for me to imagine it’s coming from Mueller’s team. And it’s kind of a ham-handed effort if it’s someone who’s trying to help the president,” he said. Russia has denied interfering in the 2016 U.S. presidential election, as U.S. intelligence agencies allege, and Trump has denied there was any collusion between his campaign and Moscow. Most of the questions relate to possible obstruction of justice, the reports said. While the questions do not explicitly cite “collusion,” they do address what the president knew about hacking by Russia, its use of social media and “other acts aimed at the campaign,” the Times said.