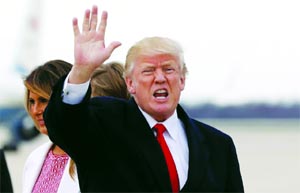 Agencies, Washington President Donald Trump declared as “dead” on Monday a program that protects immigrants brought to the United States illegally as children and pressed Congress to pass legislation to secure the U.S. border with Mexico. Trump’s latest comments on immigration, made via Twitter, came as the U.S. Department of Justice moved to establish first-ever quotas for immigration judges aimed at speeding up cases and clearing a backlog. Trump said in September he would terminate the Deferred Action for Childhood Arrivals (DACA) program introduced by his Democratic predecessor, Barack Obama, but gave the Republican-controlled Congress until March 6 to replace it. Congress failed to meet that deadline, but courts have ruled the program can stay in place for now.“DACA is dead because the Democrats didn’t care or act, and now everyone wants to get onto the DACA bandwagon,” the Republican president said in a Twitter post. Trump also urged Congress to “pass tough laws and build the WALL,” referring to a U.S.-Mexico border wall he has championed as a way to curb illegal immigration and the flow of drugs. In a move aimed at speeding deportations, the Department of Justice sent an email on Friday to federal immigration judges telling them their job performance would be evaluated based on how quickly they close cases. Judges will be required to complete at least 700 cases a year and have fewer than 15 percent of their decisions appealed and remanded back, according to Dana Marks, spokeswoman for the National Association of Immigration Judges. Another metric demands that 85 percent of removal cases for detained immigrants be completed within three days of a hearing on the merits of the case. The new policy is expected to take effect on Oct. 1. A growing backlog of immigration cases reached 687,000 in March, according to a Reuters analysis of court records, and caused asylum seekers to wait years to present their cases. Amiena Khan, executive vice president of the immigration judges’ union, said the new rules threatened to interfere with judicial independence.