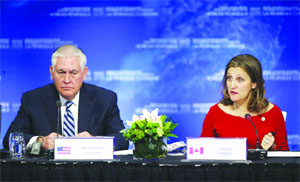 Washington The Trump administration has dropped a controversial plan to add a citizenship question to the 2020 census, marking a major victory for civil rights groups. It comes just days after the Supreme Court blocked efforts to include the question, ruling that the government’s justification seemed “contrived”. The White House argued it would bolster protections for minority voters, said a BBC News report. But opponents said it would deter immigrant households from taking part in the once-a-decade population count. Democrats and civil rights groups feared this reluctance would lead to millions of people - mostly Latinos and African Americans - not being counted. Last week, the Supreme Court temporarily blocked the citizenship question and said the government had not provided adequate justification for it. President Trump initially touted the idea of delaying the census to allow time to provide new legal arguments, but on Tuesday his administration backed down. “The Census Bureau has started the process of printing the decennial questionnaires without the question,” Commerce Secretary Wilbur Ross said in a statement. In a series of later tweets, President Trump said it was “a very sad time for America”. This question has not appeared on a US census for all Americans since 1950, though it has been asked to some subsets of the population between 1970 and 2000. The population count helps the government draw up districts for state and local elections, and determine how much federal funding each state receives - a matter of hundreds of billions of dollars. In a 2018 report, Census Bureau researchers found that the inclusion of a citizenship question will likely suppress response rates in households with immigrants and minority groups, leading to a “lower-quality population count”. But Mr Ross - the billionaire financier who oversees the Census Bureau - insisted that detailed citizenship data is of “greater importance than any adverse effect” posed by an undercount.