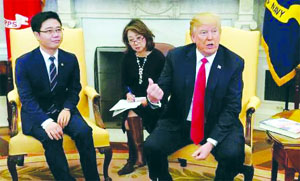 Agencies, Washington US President Trump has met with North Korean defectors in the Oval Office, a provocative action meant to highlight human rights violations and one that could raise alarms in Pyongyang, according to The Washington Post. Trump welcomed eight defectors — six who live in South Korea and two who live in the United States — two days after he punctuated his State of the Union address by praising Ji Seong-ho, a defector from North Korea who had been invited to watch the address from the first lady’s box. He was among the group at the White House on Friday.During brief remarks to reporters, Trump, seated next to Ji, said some of the defectors had remained in another room out of sight of the television cameras because they remain fearful for their safety. “They are petrified to be here,” Trump said. “It’s tough stuff.” As he has before, Trump criticised past administrations for not acting more forcefully on North Korea, though he did not specify whether he meant shutting down the nation’s nuclear weapons program or dealing with human rights violations, or both. “Many administrations should have acted on this a long time ago when we weren’t in this kind of position,” the president said. “It could have been done 12 years ago, it could have been done 20 years ago. .?.?. We have no road left. We’ll see what happens. We’ll get through the Olympics, and maybe something good will come out of the Olympics.” The United States and South Korea agreed to suspend joint military exercises on the peninsula until after the two-week Winter Games, which begin February 9 in PyeongChang. The North has agreed to send a delegation of athletes and officials, and they will join the South during the traditional march into the opening ceremony.