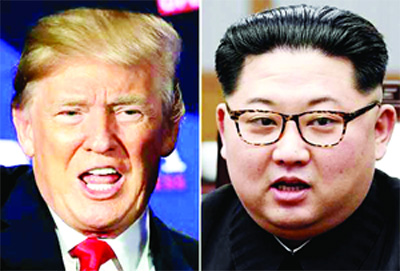 Washington,  US President Trump has pulled out of a highly anticipated summit meeting with Kim Jong-un, accusing the North Koreans of bad faith and lamenting that “this missed opportunity is a truly sad moment in history.” According to a report in The New York Times, the president made his announcement in a remarkably personal, at times mournful-sounding letter to Mr Kim, North Korea’s leader, in which he cited the North’s “tremendous anger and open hostility” in recent public statements as the specific reason for canceling the meeting. Mr Trump said later that the meeting, which had been scheduled for June 12 in Singapore, could still happen, and North Korea issued a strikingly conciliatory response, saying it hoped Mr Trump would reconsider. But Mr Trump also renewed talk of military action against the North and vowed to keep pressing economic sanctions, guaranteeing that for now, at least, his unlikely courtship of Mr Kim will give way to a more familiar cycle of threats and tension. The mixed messages were in keeping with a diplomatic gambit that had an air of unreality from the start, when, in early March, Mr Trump spontaneously accepted Mr Kim’s invitation to meet — an acceptance that North Korea did not even publicly acknowledge for several days. As the date for the meeting drew closer, American and North Korean officials staked out deeply divergent positions on how quickly the North should surrender its nuclear arsenal. North Korean officials failed to show up for a planning meeting last week in Singapore, snubbing a White House advance team led by the deputy chief of staff, Joe Hagin. The White House, which seemed ill-prepared for a long negotiation, began to have second thoughts. By Thursday, after a North Korean official labeled Vice President Mike Pence a “political dummy” and threatened a “nuclear-to-nuclear showdown,” there seemed little rationale for the encounter, beyond Mr Trump’s desire to make history. “I believe that this is a tremendous setback for North Korea and, indeed, for the world,” a resigned-sounding president said at a bill-signing ceremony. But he added, “If and when Kim Jong-un chooses to engage in constructive dialogue and actions, I am waiting.” “They want to do what’s right,” he said. “I really think that they want to do — and it was only recently that this has been taking place.” North Korea appeared to reciprocate, declaring that it was willing to give Mr. Trump the “time and opportunity” to reconsider his decision. “The unilateral cancellation of the summit was unexpected and very regrettable,” said Kim Kye-gwan, a vice foreign minister of North Korea. But he said the North remained “willing to sit down with the United States any time, in any format, to resolve the problems.” Later Thursday in Washington, Kang Kyung-wha, the South Korean foreign minister, and Secretary of State Mike Pompeo spoke via telephone and agreed to continue working toward creating the right conditions for the United States and North Korea to talk, South Korea’s Foreign Ministry said in a statement.The statement said that Mr Pompeo had stressed a willingness to continue dialogue with North Korea. Hours before Mr Trump’s announcement, North Korea had blown up an underground nuclear testing site before foreign journalists gathered to witness the demolition. It was the latest in a series of gestures by the North meant to smooth the way for a summit meeting. In his letter to Mr Kim, which a senior White House official said the president dictated, Mr Trump mixed regret with a blunt warning to North Korea that it would lose any nuclear confrontation with the United States. As he so often has with Mr Kim, Mr Trump veered between conciliation and belligerence, often in dizzying succession.The Times needs your voice. We welcome your on-topic commentary, criticism and expertise. “You talk about your nuclear capabilities, but ours are so massive and powerful that I pray to God they will never have to be used,” Mr Trump wrote. But then he added, “I felt a wonderful dialogue was building up between you and me, and ultimately it is only that dialogue that matters. Someday, I look very much forward to meeting you.” While White House officials said a summit meeting with Mr. Kim was still a possibility, keeping the existing date was all but impossible, given the fact that, one senior official said, “June 12 is in 10 minutes.” For Mr Trump, who never tires of extolling his deal-making skills, the abrupt cancellation of the meeting raises questions about how he handled the mercurial North Korean leader. It also creates thorny issues for the administration’s efforts to keep the pressure on the North. South Korea, which was caught off guard by Mr Trump’s decision, may opt to continue its own diplomacy with Mr Kim, opening a rift with its ally. Mr. Trump did not warn South Korea’s president, Moon Jae-in, of his decision, even though the two leaders met in Washington on Tuesday. China, the linchpin of any sanctions campaign, may relax its pressure on the North, particularly because it was Mr Trump, not Mr Kim, who pulled the plug on this effort. Moreover, threats of military action against the North may be harder to justify at a time when Mr Kim and Mr. Moon are talking about a new era of peace on the Korean Peninsula. Mr Trump’s reversal drew cries of diplomatic malpractice from Democrats — Senator Christopher S. Murphy of Connecticut said it was “as discombobulated as everything else in this White House’s foreign policy” — and support from Republicans — Senator Mitch McConnell of Kentucky said that “they did exactly the right thing.” But the process exposed visible differences in tone between Mr. Trump and the people working for him. While the president continued to speak of the possibility of a meeting, a senior official briefed reporters about the “trail of broken promises” that led to its cancellation.