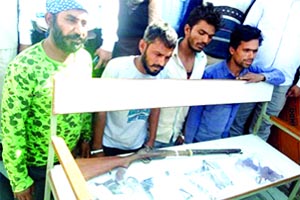 Washington,  US President Donald Trump said that Iran was ‘playing with fire’ after Tehran announced it had exceeded its limit for low-grade enriched uranium allowed under a 2015 nuclear deal. Asked at a White House event if he had a message for Iran, Trump said,””They know what they’re doing. They know what they’re playing with and I think they’re playing with fire,” Earlier on July 1, the International Atomic Energy Agency’s (IAEA) Director General Yukiya Amano confirmed that Iran had exceeded the limit of 300 kilograms (661 pounds) for enriched uranium. Enriched uranium is used to make reactor fuel and, enriched at higher levels, could be used to make nuclear weapons. Iran’s state-run IRNA news agency earlier the same day quoted Foreign Minister Mohammad Javad Zarif acknowledging to journalists that the 300-kilogram limit had been breached, adding that Iran considered it “our right reserved in the nuclear deal.” On May 8, Iran announced that it partially discontinued its commitments under its 2015 nuclear agreement. The move came on the one-year anniversary of Trump’s decision to exit the Iran nuclear deal and reimpose sanctions on Tehran. The United States withdrew from the nuclear deal in 2018 and reimposed sanctions on Iran’s oil exports and other sectors. The nuclear deal was inked by Iran with Britain, China, France, Germany, Russia, and the United States in 2015, following which Tehran curbed its uranium enrichment capacity to win sanctions relief in return. Iran spared a 60-day deadline for the signatories of the nuclear deal to address Iran’s interests under the deal. Relations between Washington and Tehran have plummeted with recent attacks on oil tankers in the Gulf of Oman and near the Strait of Hormuz exacerbating the situation. Washington has blamed Iran for the incidents, while Tehran denied any involvement. The statement added that “even before the deal’s existence, Iran was violating its terms,” to which Zarif reacted on Tuesday by tweeting “seriously?” Zarif insisted Iran had done nothing wrong. “We have NOT violated the #JCPOA,” he tweeted, referring to the deal. He said Iran would “reverse” its decision “as soon as E3 abide by their obligations” — referring to the European parties to the deal: Britain, France and Germany. Zarif’s USn counterpart Mike Pompeo accused Iran of using its nuclear program “to extort the international community and threaten regional security.” The International Atomic Energy Agency confirmed Iran had exceeded the limit that the deal imposed on its stockpile of low-enriched uranium (LEU). A diplomat in Vienna, where the UN’s nuclear watchdog is based, told AFP that Iran had exceeded the 300 kilogram (661 pound) limit by two kilograms. Russia’s deputy foreign minister, Sergei Ryabkov, said Iran’s move was a cause for “regret” but also “a natural consequence of recent events” and a result of the “unprecedented pressure” from the US. “One mustn’t dramatize the situation,” Ryabkov, whose country is a close ally of Tehran, said in comments reported by Russian news agencies.