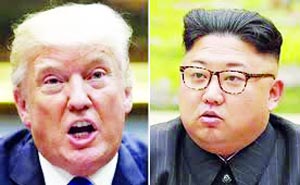 Agencies, Washington, US President Donald Trump has said there is a “very substantial chance” a historic summit with North Korea’s Kim Jong-un next month may not happen. He said the North must meet conditions for the summit to go ahead though if it did not, it might happen “later”, according to the BBC News report. Mr Trump was speaking as he received South Korea’s President Moon Jae-in at the White House.The North has said it may cancel the summit if the US insists on it giving up nuclear weapons unilaterally. Mr Trump did not say what conditions the US had set for the summit but, asked by a reporter about the North’s arsenal, he said “denuclearisation must take place”. The 12 June summit is due to take place in Singapore. It follows a historic meeting between the two Korean leaders in April. Meanwhile, North Korea has agreed to let in journalists from the South to watch the dismantling of its nuclear test site. The group, who had earlier been denied visas, will join a team of international media who are in the country to visit Punggye-ri over the next few days. The demolition of the site has been billed as a goodwill gesture but may be delayed by bad weather. What did Trump say about the summit? Mr Trump told reporters: “We’ll see what happens. “There are certain conditions that we want and I think we’ll get those conditions and if we don’t we don’t have the meeting. “You go into deals that are 100% certain - it doesn’t happen. You go into deals that have no chance and it happens and, sometimes, happens easily.”