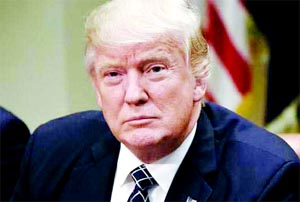 Agencies, Washington US President Donald Trump has said he was “totally misrepresented” by those saying he used the term “shithole” to describe African nations last week, the BBC News reported on Tuesday. Mr Trump also said the allegation was hurting efforts to strike a deal to protect so-called Dreamer immigrants.The president was responding to a claim by Democratic Senator Dick Durbin that he used “vile and racist” language during a meeting on immigration reform. The alleged remarks sparked global outrage and demands that he apologise. “There is no other word one can use but racist,” said a UN spokesman.On Monday, two senators who said he did indeed use the disparaging remark stood by their account of what took place. The row broke out after Republican and Democratic lawmakers visited the president in the Oval Office on Thursday to work on a proposal for an immigration deal. A key issue they need to agree on is what to do with an Obama-era scheme that protects some 800,000 young people who entered the US illegally as children - known as the Dreamers. But the alleged slur was uttered during another topic for discussion - the Temporary Protected Status (TPS) given to a number of nationalities currently living in the country. In recent weeks the Trump administration has made a series of announcements that have brought that status to an end. Hours after the meeting, reports emerged that Mr Trump had asked: “Why are we having all these people from shithole countries come here?” The US should be taking in migrants from countries like Norway, he is reported to have said.Accounts suggest that when Mr Trump was told that the largest groups of immigrants with that status were from El Salvador, Honduras and Haiti, the president responded: “Haitians? Do we need more Haitians?”

Sixty-four trade groups, foreign governments, Republican candidates and others stayed at or held events at properties linked to U.S. President Donald Trump during Trump’s first year in office, a political watchdog group said in a report released on Tuesday. The arrangements represented “unprecedented conflicts of interest” because Trump oversees the federal government and has not divested from properties he owns or that carry his name, Public Citizen, a nonpartisan group, said in the report. Shortly before taking office last year, Trump said he would hand off control of his global business empire to his sons Donald Jr. and Eric, and move his assets into a trust to help ensure that he would not consciously take actions as president that would benefit him personally. Many government and private ethics watchdogs said the president should have gone farther, divesting assets that could cause a conflict of interest.The White House declined comment on the Public Citizen report, which is based on filings to the U.S. Federal Election Commission and news stories. It referred the issue to the Trump Organization. A spokesperson there did not immediately respond to a request for comment. Representatives of four foreign governments - Kuwait, Malaysia, Saudi Arabia and Turkey - held events at the Trump International Hotel in Washington, the report said. That hotel, just blocks from the White House, was the most popular Trump property, accounting for more than half the 64 events. Public Citizen has joined 17 Democratic lawmakers in suing the U.S. General Services Administration for documents regarding the Trump Organization’s 2013 lease of the property from the U.S. government. FEC records, which require disclosing campaign expenditures over $100, show that 24 groups backing candidates for Congress held events, most of them fundraisers, at Trump properties. All, like the U.S. president, were Republicans. Also holding events at Trump properties were oil and mining interests, representatives of the vaping industry and a college football team, the report said. It did not cite a figure for the combined spending of the 64 groups at Trump properties.