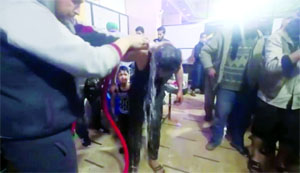 Agencies, Washington/United Nations U.S. President Donald Trump on Monday promised quick, forceful action in response to a “barbaric” suspected chemical weapons attack in Syria, appearing to suggest a potential military response. Speaking at a meeting with military leaders and national security advisers, Trump said he would make a decision by Monday night “or very shortly thereafter” on a response, adding that the United States had “a lot of options militarily” on Syria. “But we can’t let atrocities like we all witnessed ... we can’t let that happen in our world ... especially when we’re able to because of the power of the United States, the power of our country, we’re able to stop it.” The suspected chemical weapons attack late on Saturday killed at least 60 people, with more than 1,000 injured in several sites in Douma, a city near the capital, Damascus, according to a Syrian aid organization. Two days later, the White House was still only able to say that the attack fit the pattern of Syrian President Bashar al-Assad’s chemical weapon use. Initial U.S. assessments have so far been unable to determine conclusively what materials were used in the attack and could not say with 100 percent certainty that Assad’s government forces were behind it. Asked at a Cabinet meeting earlier on Monday if Russian President Vladimir Putin bore any responsibility for the attack, Trump said: “He may, yeah, he may. And if he does, it’s going to be very tough, very tough.” On Sunday, the U.S. president who had sought warmer relations with Russia criticized Putin by name on Twitter as he castigated Russia and Iran for backing “Animal Assad.”

United Nations: U.S. Ambassador to the United Nations Nikki Haley wants the U.N. Security Council to vote on Tuesday on a U.S. draft resolution to establish a new inquiry into who is to blame for using chemical weapons in Syria, diplomats said on Monday. The United States circulated a revised draft resolution to the 15-member council, which it first put forward on March 1, amid a warning from President Donald Trump that there would be a “big price to pay” for a suspected deadly poison gas attack on a rebel-held Syrian town on Saturday.