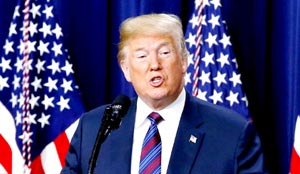 Washington, President Donald Trump on Tuesday warned that anyone trading with Iran will not be allowed to do business with the United States hereafter following the re-imposition of sanctions on Iran. "Anyone doing business with Iran will NOT be doing business with the United States," Trump said in a tweet. The sanctions follow the US withdrawal from the Joint Comprehensive Plan of Action, also known as the Iran nuclear deal, earlier this year. Iran's president Hassan Rouhani hit out against the US for the punitive action against Iran's oil trade, saying the measures were "psychological warfare" aimed to "sow division among Iranians". Trump signed an executive order which brought sanctions back into place at 00:01 EDT (12:31 IST) on Tuesday. According to a US State Department statement, the sanctions target the purchase or acquisition of US bank notes by Iran's government; Iran's trade in gold and other precious metals; graphite, aluminium, steel, coal and software used in industrial processes; transactions related to the Iranian currency, the rial; activities relating to Iran's issuance of sovereign debt, and Iran's automotive sector The Iran deal was negotiated during the presidency of Barack Obama, which saw Iran limit its controversial nuclear activities in exchange for sanctions relief. Trump has called that deal "one-sided", "disastrous" and the "worst I've ever seen". He believes renewed economic pressure will force Iran to agree to a new deal and end its "malign" activities. "The Iran sanctions have officially been cast. These are the most biting sanctions ever imposed, and in November they ratchet up to yet another level," Trump said in the tweet. A second round of sanctions is planned to take effect on November 5 which will have implications for Iran's energy and shipping sectors, petroleum trading and transactions by foreign financial institutions with the Central Bank of Iran. The European Union said the bloc, as well as Britain, France and Germany, deeply regretted the US move. "We are determined to protect European economic operators engaged in legitimate business with Iran," EU diplomatic head Federica Mogherini said in a statement.