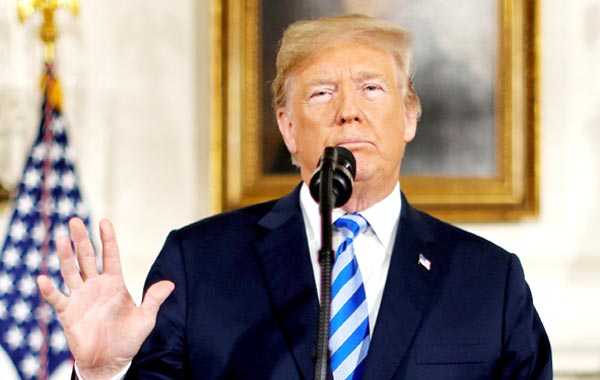 Washington, United States President Donald Trump has warned of declaring national emergency to force funding for building the controversial US-Mexico border wall after his meeting with Congressional leaders yielded no deal. "This is national security we're talking about," Trump said during a press conference after another round of talks at the White House with Democrat leaders on ending the two-week government shutdown, adding he was considering declaring a state of emergency to use military funding for the wall. Trump and his conservative allies have insisted that the wall is essential to addressing illegal immigration and drug trafficking, while Democrats have slapped the proposal as an "inefficient, unnecessary and costly" solution to strengthening border security. He defended his request for $5.6 billion to build a wall on the Mexican border, saying that he was prepared to keep the government shutdown for as long as it takes, months or even years. "The southern border is a dangerous, horrible disaster," he said, decrying illegal immigration, drug smuggling and human trafficking. Describing the situation as a "national emergency," Trump said he was also looking into ways to build the wall without congressional approval. "I am allowed to do that," he said. But Nancy Pelosi, who took over as speaker of the House on Thursday, told reporters "We are committed to keeping our borders safe, but we recognize on the Democratic side that we really cannot resolve this until we open up government. And we made that very clear to the president. Services are being withheld from the American people. Paychecks are being withheld.". Since December 22, parts of the federal government had shut down after Congress and the White House failed to reach a spending deal. Funding expired for roughly a quarter of the federal government, including appropriations for the Department of Homeland Security, the Department of Justice and the Department of Housing and Urban Development.