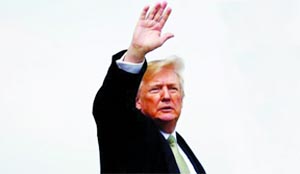 Agencies, Washington Saudi, Emirati and Qatari leaders will beat a path to U.S. President Donald Trump’s door in the next few weeks for back-to-back visits that are unlikely to solve a long-running dispute among America’s Gulf allies. Washington is keen to end the standoff between Qatar on one side and several other Arab nations on the other. The rift has divided the Gulf Cooperation Council (GCC) group of nations and hurt U.S.-led efforts to maintain a strong front against Iran. The United States was hoping to host a U.S.-GCC summit later this year but the prospects of that happening appear slim given that the rival leaders are still at odds. “They don’t see eye to eye. They’re not ready to solve this crisis,” a senior administration official said, referring to the parties embroiled in the Gulf crisis. Saudi Arabia, the United Arab Emirates, Bahrain and Egypt cut off travel and trade ties with Qatar last June, accusing it of backing their arch-rival Iran and supporting terrorism. Qatar denies the charges and says the boycott is an attempt to impinge on its sovereignty and rein in its support for reform. Washington has strong alliances with the rival sides. Qatar hosts the largest U.S. air base in the region which has been crucial to its anti-Islamic State military campaign in Syria and Iraq. At the same time, the Trump administration has forged even closer ties with Qatar’s rivals, Saudi Arabia and the UAE. Saudi Crown Prince Mohammed bin Salman will meet with Trump on Tuesday in Washington and the Qatar dispute is unlikely to be at the forefront of issues the young leader will want to discuss, diplomats say. Qatari Emir Sheikh Tamim bin Hamad al Thani then meets Trump on April 10 in the White House.And, keen to have the last word with Trump, Abu Dhabi Crown Prince Sheikh Mohammed bin Zayed has sought to meet Trump after a scheduled meeting with the Qatari emir, the senior administration official said.