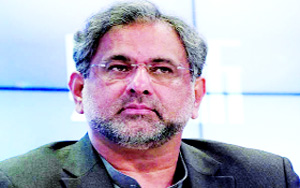 Agencies, Washington Pakistan and the United States are jointly fighting terrorism, which is their common enemy, and his nation would continue to support Washington for the same unaffected by Trump’s statement, Prime Minister Shahid Khaqan Abbasi has said. ‘If President Donald Trump looks at Afghanistan from Pakistan’s perspective, he will understand that the reality of Islamabad is very different from the perception,’ Radio Pakistan quoted Mr Abbasi as saying in an interview published by the Washington Post. Pakistan and the United States have a very strong relationship, but in the last 15 years, it has kind of gone downhill, he said. To a question about US policy statement that Pakistan provides sanctuaries to Afghan terrorists, he said that no such sanctuaries are left in Pakistan. ‘If someone provides us with a location, we will take action against that.’ There has not been even a single instance where actual intelligence has been provided to Pakistan and it has not been acted upon, he added.‘We have assisted the US forces and will continue to assist them. There have been over 1.1 million overflights within our airspace of US aircraft going to Afghanistan. There have been millions of tons of equipment and cargo going there.’ This will continue as Pakistan believes that these measures help in the war against terror. It helps bring stability to Pakistan, so we support that effort, he said. ‘Pakistan is fighting the largest war on terror in the world. We have 200,000 troops fighting a war against terror today on the western border. We have lost 6,500 troops. We have defeated the same enemy the rest of the world failed to defeat in Afghanistan, on the same terrain, with our own resources.’ The Prime Minister said Pakistan and the United States have had a very strong relationship, but in the last 15 years, it has kind of gone downhill. Adding a whole new dimension is this tweet. He said security assistance was minimal. There were some military sales and we bought some F-16 fighters, which we did not receive. All that has done is degrade our ability to fight the terrorists. He said on the ground, the reality is that in the last year, 29 suicide bombers crossed over from Afghanistan into Pakistan and attacked our installations. ‘We are committed to fighting the war against terror. There are no two ways about it. We have assisted the U.S. forces and will continue to assist them,’ the Prime Minister said.