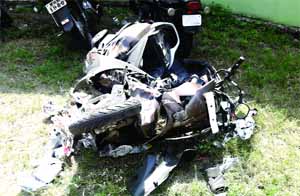 Chronicle Reporter, Bhopal Two minor boys were killed in an accident in the BRTS corridor in Bairagarh Township on Friday. The two boys, both around 14-year-old, died when a bus hit the two-wheeler they were riding at Bairagarh road in BRTS corridor. The boys studied in the Sindhu Samaj School in Bairagarh. They had apparently entered the corridor, riding the two-wheeler. The bus was approaching and the boy on the driver’s seat was unable to leave the corridor. As per the information received, the incident took place near TVS two-wheeler showroom. After the collision, the two-wheeler was completely damaged. The boys had sustained critical injuries. Police rushed to the spot and the two injured children were rushed to the Hamidia hospital in an ambulance where both of them died during the treatment. One of the boys was identified as Dinesh Dulani (14), resident of Bairagarh area. His father runs a tea shop whereas other deceased is identified as and Vaibhav Kala (14) resident of Bairagarh area whose father works in a private firm in Govindpura area. The bus driver is absconding after the incident and the Bairagarh police have seized both the vehicles and are in search of the absconding driver. The local police officials said that hunt is on for the bus driver.