Uma reiterates to remain away from electoral politics 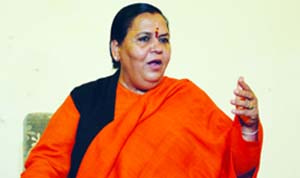 Chronicle Reporter, Bhopal Reiterating her decision to not contest elections for the next 2-3 years owing to health reasons, Union Drinking Water and Sanitation Minister Uma Bharti today said that she will not even seek Rajya Sabha candidature. “Nonetheless, I would remain active in politics and continue to serve as a minister,” Ms Bharti, who first announced her decision to take break from electoral politics in Jhansi two days earlier, told media here. “I need to follow a disciplined lifestyle and rejuvenate myself. Subsequently, I may return to electoral politics. In the meantime, I am open to campaign for the party in elections on being assigned the responsibility,” she said. Reminiscing sad moments of her public life, Ms Bharti described her name being dragged into the state’s Professional Examination Board (MPPEB) scam as one of them. However, she refused to comment further as the matter is sub-judice and is being investigated by the Central Bureau of Investigation. Modi becoming PM and Yogi becoming CM of UP pleasant moments of my life Uma said that on the other hand, Mr Narendra Modi becoming the Prime Minister and Yogi Adiyanath becoming the chief minister of Uttar Pradesh are most pleasant moments of my life besides taking ‘sanyas’. The firebrand sadhvi said that resigning from the post of chief minister for the honour of Tricolour, the Ayodhya case verdict in 2010 and remaining steadfast on her ideology after leaving the BJP despite inducements were glorious moments of her life. In response to a query over the troika of Gujarat leaders Alpesh Thakor, Jignesh Mewani and Hardik Patel setting sight in Madhya Pradesh and whether it could worry the BJP, she said that Congress President Rahul Gandhi should be worried by their rise as they are finding the space instead of the Opposition. Replying to query on Rashtriya Swayamsevak Sangh chief Mohan Bhagwat’s statement on the RSS capable of preparing military personnel within three days, she said that the then Prime Minister Jawaharlal Nehru had sought the Sangh’s assistance when Pakistan had attacked Jammu and Kashmir after Independence. “It is strange that speaking against the Army by certain people in Jawaharlal Nehru University is termed as freedom of expression. On the other hand, Mr Bhagwat’s comments are criticised and not considered in the same light,” said Ms Bharti. Speaking about the prospect of an out-of-court settlement in the Ram Temple matter, Ms Bharti said that the court had recognised that the land belonged to Ram Lalla in 2010. Presently, the dispute does not pertain to faith but to land and could be settled outside the court. Bharti said she will not contest elections for the next three years owing to health problems. She, however, clarified that she was not retiring from politics. Regarding her role in the politics of the state, she said she had no desire of campaigning in the state. She said she wants to make ‘darshan’ of God. She said this when it was pointed out to her that she was not in the list of star campaigners for BJP in the forthcoming by-polls. Uma said she was suffering from knee and back problems, and to recover, she would take some rest. I will not fight elections for the next three years, she said. “I want to live a balanced life, have a lifestyle according to doctors’ advice,” she said. Bharti said BJP chief Amit Shah had asked her to continue as Union minister till 2019. I had a talk with him during which Shah told me to continue in the Union government, she said. There is nothing unusual about taking such a break, Bharti said, adding that former prime minister Atal Bihari Vajpayee had done so for health reasons during his political career. “This doesn’t mean I am retiring from politics,” the 58-year-old leader said.“I will have many years left in politics even after the next three years. In fact, I am focusing on health to ensure that it does not deteriorate,” the former Madhya Pradesh chief minister said.“I need to rejuvenate my body,” she said.Uma said she had decided to opt out of the electoral arena due to health issues.

Considering ‘pakora’ as lowly is inappropriate

About ‘pakora (fritter)’ politics, she said that considering ‘pakora’ as lowly is inappropriate as several employment avenues are associated with it. Replying to a query on veteran Congress leader Mani Shankar Aiyar’s comments on Pakistan, she said that the Congress need to respond to his statements as he is associated with their ideology.