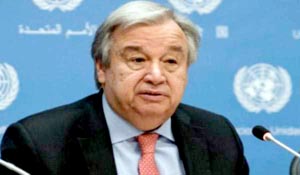 United Nations, Ten years after conflict involving Georgia, Russia and the South Ossetia region broke out, United Nations chief, António Guterres has said that “increased commitment” was needed by “relevant actors” to advance the on-going reconciliation and peace process. “The Secretary-General recalls that it is a reminder of the need to resolve this and other protracted conflicts in Europe,” said a statement issued by his Spokesperson on Tuesday. “This requires increased commitment by the relevant actors, backed by strong political will and a reinvigoration of mediation processes.” Conflict erupted in August 2008, between Russian and Georgian forces over the largely pro-Russian enclaves of South Ossetia and separatist-led Abkhazia, which led later in the year, to the launch of international talks to resolve the crisis, known as the Geneva International Discussions, or GID. In 2009, the Incident Response and Prevention Mechanism grew out of the GID, providing a forum to discuss issues between the various regions and governments, relating to on-going concerns. The GID is co-chaired by the Organization for Security and Cooperation in Europe (OSCE), the European Union, and the UN, bringing together the countries and regions, as well as the United States. “The Secretary-General urges all the participants in the Geneva International Discussions to adopt a constructive, forward-looking approach that would allow this indispensable mechanism to fulfill its mandate”, said the statement. All concerned should prioritise progress through appropriate dialogue and refrain from divisive policies and unilateral actions that may adversely impact regional peace and security,” continued the UN chief. Mr Guterres recalled that while the GID and Mechanism have “substantially contributed to strengthening stability in recent years, more should be done on key security and humanitarian issues, including those related to the plight of the many internally displaced persons and refugees.” He said the UN would "continue to fully support this important mechanism and work with the European Union and the Organisation for Security and Cooperation in Europe (OSCE) to achieve progress on all issues.”