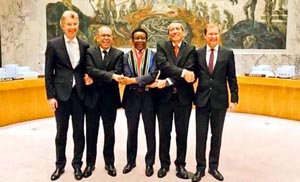 United Nations,The United Nations General Assembly elected Indonesia, Germany, Belgium, South Africa and the Dominican Republic as serve as non-permanent members of the Security Council for a two-year term starting next January. All but three of the 193 UN member states cast paper ballots. Germany and the Dominican Republic each obtained 184 votes. South Africa got 183 votes, Belgium 181 and 144 went to Indonesia. The 15-member council is the only UN body that can make legally binding decisions and has the power to impose sanctions and authorise the use of force, a report in Pakistan daily Dawn said. Indonesia outscored the Maldives 144-46 in the race for a solitary Asia-Pacific seat, while the other four candidates ran unopposed. Candidates running unopposed need to win more than two-thirds of the overall General Assembly vote to be elected.There were 190 ballots in Friday’s vote. In a typical year, the General Assembly elects five new members, which join the five elected the previous year and the five permanent, veto-powers — the United States, Britain, France, China and Russia. The five members giving up their seat at the end of this year will be the Netherlands, Sweden, Ethiopia, Bolivia and Kazakhstan.