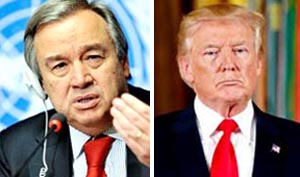 London, United Nations Secretary General Antonio Guterres has urged US President Donald Trump not to pull out from the international deal to prevent Iran acquiring nuclear weapons,saying there is a real risk of war if the 2015 agreement was not preserved. Guterres told the BBC that the Iran agreement was an "important diplomatic victory" and should be maintained."We should not scrap it unless we have a good alternative," he said, adding: "We face dangerous times." The US president has been a strong critic of the accord, in which Iran agreed to limit its nuclear programme in return for the lifting of sanctions. Trump has warned that the US would withdraw completely on 12 May - the next deadline for waiving sanctions - unless European signatories to the deal and Congress renegotiate the deal. Iranian President Hassan Rouhani has said Tehran "will not accept any restrictions beyond its commitments" to comply with international rules in the years ahead.The secretary general's comments came just days after Israel revealed what it said "secret nuclear files" accusing Iran of having covertly pursued nuclear weapons. US Secretary of State Mike Pompeo said the files provided proof that the Obama-era nuclear deal was "built on lies". European allies France, the UK and Germany meanwhile have agreed that pursuing the current nuclear deal with Iran is the best way to stop Tehran developing nuclear weapons. In 2015, Tehran signed a deal with the US, China, Russia, Germany, France and Britain agreeing to limit its nuclear activities in return for the lifting of crippling economic sanctions. Under the deal, officially known as the Joint Comprehensive Plan of Action (JCPOA), Iran is committed to slashing the number of its centrifuges, which are machines used to enrich uranium. It is also meant to cut its stockpile of enriched uranium drastically and not enrich remaining uranium to the level needed to produce nuclear weapons.