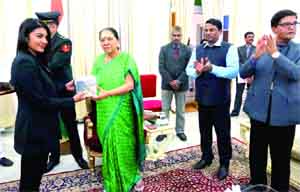 United nations,  Voicing great concern over a sharp increase in the killing and maiming of children in Mali due to ongoing fighting and instability, the United Nations Children's Fund (UNICEF) and partners have called on all warring parties to stop attacks and “keep them out of harm’s way”. “We must not accept the suffering of children as the new normal. All parties must stop attacks on children and take all necessary measures to keep them out of harm’s way, in line with international human rights and humanitarian law,” UNICEF Executive Director Henrietta Fore said on Tuesday. She added that children should be going to school and playing with their friends, not worrying about avoiding violence or being forced to fight. The Malian Government has been seeking to restore stability and rebuild following a series of setbacks since early 2012 that fractured the country, including a military coup d'état, renewed fighting between Government forces and Tuareg rebels, and the seizure of its northern territory by radical extremists. Concern is rising that while the north has been the main focus of insurrection, central areas of the country, especially around Mopti, are increasingly being embroiled in fighting. According to the UN, so far more than 150 children have been killed in 2019, with 75 injured due to violent attacks. The number of child soldiers in armed groups has doubled comparing to the same period in 2018, and more than 900 schools remain closed due to insecurity. The sharp rise in grave violations has also resulted in a dramatic increase in the need to protect children in the north and the center of Mali. “The needs of Mali’s most vulnerable children are tremendous,” stressed Lucia Elmi, UNICEF Representative in Mali. UNICEF has been working with local authorities to protect more than 377,000 at risk children, along with other UN agencies and partners, to provide medical and psychosocial care for conflict-affected children; support the release and reintegration of children from armed groups; reunite separated children with their families; and provide care for survivors of violence, including sexual violence. The crisis in Mali remains one of the least funded humanitarian operations in the world. In 2019, UNICEF is requesting $4 million to meet child protection needs in the country.