Uproar by oppn in RS on their demand for referring TT Bill to Select comm, adjourned for day 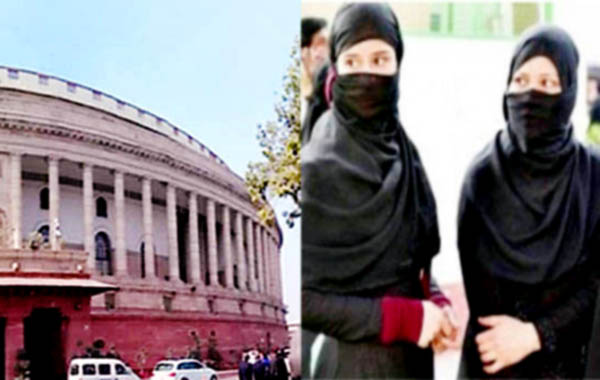 New Delhi, Uproar by a united opposition over their demand for referring the Triple talaq Bill to a Select committee of the Rajya Sabha led to disruption of proceedings of the House, forcing its adjournment for the day. Soon after the House met in the post lunch session, the members of the AIADMK were again in the well over their demand for stoppage of construction of dam across the Cauvery region. Amid the uproar, Health Minister JP Nadda introduced the Allied and Healthcare professionals Bill 2018. Thereafter, the Deputy Chairman harivansh sought to take up the consideration and passage of the Triple Talaq Bill and appealed to the agitating members to allow the House to proceed. However, Derek O' Brien of the All India Trinamool Congress stood up on his seat to say that he had given a notice under Rule 125 that the Bill be referred to a Select committee of the Rajya Sabha. Leader of the Opposition in the Rajya Sabha Ghulam Nabi Azad said that on behalf of the Congress and the entire opposition, he has stated that they want a discussion. "Ninety per cent of the opposition want to take up the discussion on the Bill. However, this is an important Bill and before a discussion starts on it, we want that it should be referred to a select committee. Such an important Bill which will determine the future of crores of women in the country would not be passed without legislative scrutiny. It should be referred to a select committee.’’ To this Minister of state for parliamentary affairs Vijay Goer said that the House had not received any notice in this regard from the Congress, only a notice from Mr Derek o Brien. ‘’The Bill is aimed at providing justice to Muslim women,’’Mr Goel said an charged the Congress of not being in favour of providing justice to Muslim women. The uproar on the issue, forced the Deputy Chairman to adjourn the House for 15 minutes.When the House reassembled after the adjournment, the opposition continued to insist on its demand to refer the Bill to a select committee. Amid the uproar, the Chair adjourned the House for the day.