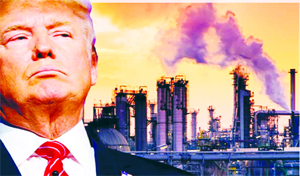 Agencies, Washington US President Donald Trump has said his country could “conceivably” return to the 2015 Paris climate accord if an agreement treated America more fairly, the BBC News reported on Thursday. He said it “was a bad deal for the US”, repeating comments made when he announced the US withdrawal last June.But he said he had no problem with the accord itself.A US pull-out will make the US in effect the only country not to be part of the accord. The announcement sparked global anger. Some critics have called it an abdication of US leadership on a key global challenge. The Paris agreement commits countries to keeping the rise in global temperatures “well below” 2C more than pre-industrial levels and aiming for a tighter limit of 1.5C. In a separate development on Wednesday, New York City announced plans to sell off $5bn (£3.7bn) in fossil fuel investments from its $189bn public pension funds over the next five years. The city authorities also filed a multibillion dollar lawsuit against five major oil companies, seeking damages for “contributions to global warming”. New York City said the lawsuit against BP, Chevron, ConocoPhillips, Exxon Mobil and Royal Dutch Shell would help fund protection against climate change. The lawsuit follows similar recent moves by a number of cities in California. “It’s an agreement that I have no problem with but I had a problem with the agreement that they (the Obama administration) signed because, as usual, they made a bad deal,” he told reporters. “So we could conceivably go back in.Mr Trump stressed his administration’s commitment to environmental issues, “clean water, clean air”, but added “we also want businesses that can compete”. “The Paris accord really would have taken away our competitive edge, and we’re not going to let that happen,” he said.Mr Trump has claimed in the past that the agreement would cost the US $3tn in lost GDP and 6.5 million jobs - while rival economies like China and India were treated more favourably. When he announced last June he was pulling the US out of the accord, Mr Trump said he wanted to negotiate a new “fair” deal that would not disadvantage US businesses and workers. He also said during the presidential election campaign that he wanted to help US oil and coal industries.It was not clear from his comments on Wednesday whether he has embarked on any attempt to renegotiate America’s terms. Last September, the US was present as an observer when environment ministers from about 30 countries discussed key issues relating to the Paris agreement in Montreal, Canada. French President Emmanuel Macron in December said he would not agree to a renegotiation but was hopeful the US would return to the accord.Analysts have said the US withdrawal from the Paris agreement makes it more difficult for the world to reach the goals that it set for itself in the Paris agreement. The US contributes about 15% of global emissions of carbon, but it is also a significant source of finance and technology for developing countries in their efforts to fight rising temperatures.No timescale for a US withdrawal from the accord has been given, although White House sources have previously suggested it could take up to four years.