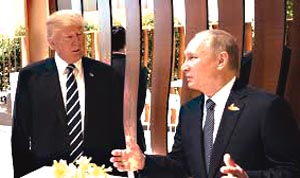 Agencies, London/Washington The United States said on Monday it would expel 60 Russian diplomats, joining governments across Europe in taking action against the Kremlin for a nerve agent attack on a former Russian spy in Britain that they have blamed on Moscow. It was the toughest action that U.S. President Donald Trump had taken against Russia since coming to office. British Foreign Secretary Boris Johnson tweeted that “Today’s extraordinary international response by our allies stands in history as the largest collective expulsion of Russian intelligence officers ever and will help defend our shared security.” British Prime Minister Theresa May said the coordinated measures “clearly demonstrate that we all stand shoulder to shoulder in sending the strongest signal to Russia that it cannot continue to flout international law”. Russia’s Foreign Ministry called the actions a “provocative gesture” and promised to respond.Moscow has denied being behind the attack on Sergei Skripal and his daughter in the southern English city of Salisbury on March 4. The staff expelled by the United States included 12 intelligence officers from Russia’s mission to United Nations headquarters in New York. Trump also ordered the closure of the Russian consulate in Seattle. “To the Russian government we say: when you attack our friends, you will face serious consequences,” a senior U.S. administration official told reporters, speaking on condition of anonymity. EU leaders last week said evidence of Russian involvement in the attack presented by British Prime Minister Theresa May was a solid basis for further action. Germany and France made good on those threats by announcing expulsions and in a coordinated move, other states across the EU followed suit, along with Canada and Ukraine. Skripal’s poisoning, alleged to have employed the Soviet-era military-grade nerve agent Novichok, is the first known offensive use of a nerve toxin in Europe since World War Two. “In solidarity with our British partners, we have today notified the Russian authorities of our decision to expel four Russian personnel with diplomatic status from French territory within one week,” said French Foreign Minister Jean-Yves le Drian.