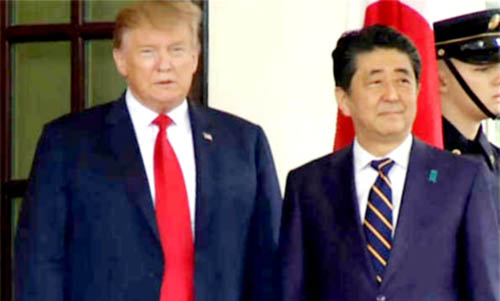 Washington, The US and Japan could strike a trade deal next month, President Donald Trump said as he called for the removal of Japan's "very massive" tariffs on American agricultural products. Trump and Japanese Prime Minister Shinzo Abe at a White House meeting on Friday agreed to accelerate new negotiations for a bilateral trade pact. Trump said the two governments may strike a deal by the time he travels to Japan in late May to celebrate Crown Prince Naruhito’s becoming the new emperor. "I think it can go fairly quickly. Maybe by the time I'm over there. Maybe we sign it over there," Trump told the meeting, part of which was open to the media. "But it's moving along very nicely, and we'll see what happens." Speaking to reporters after the meeting, Abe said Trump assured him that he will fully cooperate in arranging a first summit between Abe and North Korean leader Kim Jong Un as part of efforts to resolve Pyongyang's abduction of Japanese nationals in the 1970s and 1980s. Abe and Trump affirmed close coordination bilaterally, and trilaterally with South Korea, in achieving the fully verified denuclearization of North Korea, while vowing to maintain UN sanctions on Pyongyang, reports Kyodo news agency quoting Japanese and US officials. The Trump administration considers a bilateral deal as a means to reducing the hefty US trade deficit with Japan. Abe said they agreed to make any pact a "win-win" for both countries. "We agreed to accelerate negotiations between Japanese economic revitalization minister Toshimitsu Motegi and U.S. Trade Representative Robert Lighthizer so as to produce a mutually beneficial outcome for both countries," Abe said.