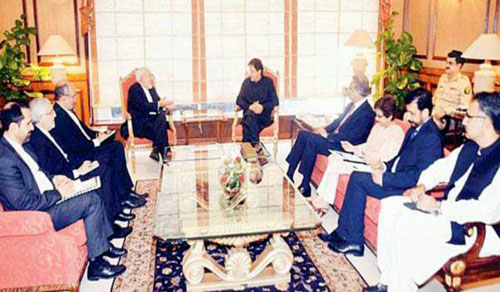 Agencies, Islamabad, The Pakistan government has announced absolute support for Iran on its troubled nuclear deal with the West that has been abandoned by the United States and urged the other parties to the agreement to honour it. While speaking to Iranian Foreign Minister Javad Zarif, who is the first foreign leader to visit Pakistan after the assumption of office by the PTI-led coalition government, Prime Minister Imran Khan recalled the “inseparable bonds” connecting Pakistan and Iran together and said that during his government he would make all efforts “to cement these relations in various areas to the benefit of both countries,” a report in Pakistan daily Dawn said. The two nations, Mr Khan said, “remained the key to growth and prosperity in the region through enhancing connectivity and promoting people to people linkages,” stressing on the importance of Pakistan and Iran in the region. Soon after Mr Khan’s taking over, Iran’s President Hassan Rouhani had sent a felicitations message making a special outreach to the new government in a bid to reset the ties that have suffered deep mistrust over the past decades. Mr Zarif delivered an invitation to PM Khan for the upcoming Asian Cooperation Dialogue (ACD) summit in Iran, which is scheduled to be held in October 2018. The stage for better ties was set last year when Pakistan and Iran started cooperating on border security. The improved border security situation was mentioned during Mr Zarif’s meeting with his counterpart Shah Mehmood Qureshi. “While expressing satisfaction over cooperation with regard to the Pakistan-Iran border, it was agreed to continue close consultations through various forums in this regard,” the Foreign Office said. FM Qureshi in his meeting with his Iranian counterpart expressed strong support for Iranian position on Joint Comprehensive Plan of Action, commonly known as Iranian nuclear deal from which the US has exited. “As regards JCPOA, while supporting Iran’s principled stance, Mr Qureshi expressed the hope that remaining parties to the agreement would uphold their commitments in letter and spirit. This was important given IAEA’s repeated verification that Iran has strictly adhered to the terms of agreement,” the FO said. Pakistan has been a consistent supporter of Iranian position on its nuclear row with the West. Islamabad believes that all countries should have access to nuclear technology for peaceful purposes. The statement was, therefore, in line with Pakistan’s longstanding position on the matter. Both foreign ministers agreed to hold the next rounds of Bilateral Political Consultations and the Joint Economic Commission at early dates. “Useful exchange of views on strengthening cooperation in economic, trade and connectivity sectors, cultural and people to people links, took place,” the FO said.