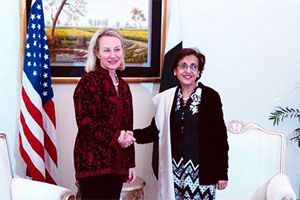 Agencies, Islamabad US Principal Deputy Assistant Secretary for South and Central Asia Alice Wells discussed regional security and bilateral relations with Pakistan Foreign Secretary Tehmina Janjua and other officials here on Monday. The Foreign Office in a statement said the US delegation was apprised about recent counter-terrorism measures taken by Pakistan’s law enforcement agencies that would contribute towards peace and stability in South Asia. Foreign Secretary Janjua, the statement said, drew the attention of the US officials to the death of Pakistani soldiers last night in Indian attack on the Line of Control and urged the US side to advise India not to escalate the situation and maintain restraint. Noting the importance of the longstanding bilateral relationship, Wells conveyed the US desire to work with Pakistan in eradicating terrorism and stabilising Afghanistan.She also underlined the need for strengthening intelligence sharing between the two countries, it said. Wells, also Special Representative for Afghanistan and Pakistan, is accompanied by senior officials from US National Security Council. This is her third visit to Pakistan since August 2017 and the first of a senior US official after President Donald Trump’s Twitter outburst against Pakistan earlier this month. Trump, in a New Year tweet, accused Pakistan of lies and deceit, saying “They give safe havens to the terrorists we hunt in Afghanistan, with little help. No more!”