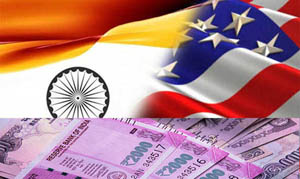 New Delhi, The Trump administration has put India under a watch list of countries whose foreign exchange policies it says need monitoring to ensure "free, fair, and reciprocal" trade. The US Treasury Department in a report to Congress said on Friday that foreign exchange policies of six countries were needed to be closely monitored and added India to the list of five countries -- China, Germany, Japan, South Korea, and Switzerland. “The Treasury Department is working vigorously to ensure that trade is free, fair, and reciprocal so American workers and companies can compete and succeed globally. We will continue to monitor and combat unfair currency practices, while encouraging policies and reforms to address large trade imbalances,” said Treasury Secretary Steven Mnuchin. The report said India, which has a $23 billion trade surplus with the US, "increased its purchases of foreign exchange over the first three quarters of 2017," although the rupee still rose in value. The Report on Macroeconomic and Foreign Exchange Policies of Major Trading Partners of the United States concluded that while the currency practices of six countries were found to require close attention, no major US trading partner met the relevant legislative criteria for enhanced analysis in 2017. Further, no trading partner was found to have met the legislative standards for currency manipulation during the current reporting period. According to the Department, the findings and recommendations are intended to combat potentially unfair currency practices, support the growth of free and fair trade, and secure stronger and more balanced global growth. "Achieving these goals require that all economies durably avoid macroeconomic, foreign exchange, and trade policies that facilitate unfair competitive advantage," noted the Department.