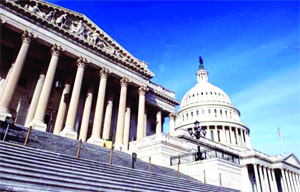 Agencies, Washington The US Government is days away from a shutdown as lawmakers and the White House feud over immigration, an agency news report said on Thursday. Congress faces a Friday deadline to pass a stopgap measure that would fund federal agencies until next month. Democrats want the bill to include protections for immigrants who entered the US illegally as children. Hopes of a bipartisan deal were scuttled last week after Mr Trump’s alleged use of a crude term during White House negotiations. Neither Republicans, who control both chambers of Congress and the White House, nor Democrats want to be blamed for a federal shutdown with crucial mid-term elections looming in November. House Republicans are attempting to entice Democrats to vote for the continuing resolution by including a provision to extend the Children’s Health Insurance Program (Chip) for six years. Chip, which provides healthcare for nine million children, is near the top of Democrats’ wish list. The House of Representatives could vote on the measure as early as Thursday, and if it passes, the bill would go to the Senate.At least some Democratic votes are needed to pass the budget measure ahead of Friday’s deadline.However, the Republican proposal could also face opposition among their own hardline rank-and-file in the House. Republicans hope a provision in the bill to eliminate a tax on expensive health plans could appease conservative lawmakers.Democrats want the bill to include protections for around 700,000 undocumented immigrants who came to country as children, known as “Dreamers”. Mr Trump last year ended Deferred Action for Childhood Arrivals (Daca), the programme that allowed Dreamers to stay in the US. The US president gave a deadline of 5 March for Congress to come up with a solution. The Republican president had signalled he was ready to make a deal to help the Dreamers in return for funding on border security, including a wall along the US border with Mexico. On Wednesday US media reported that the White House chief of staff had privately told a group of Democratic lawmakers that President Trump had not been fully informed when promising voters to build the wall during campaigning. John Kelly was quoted as saying that he had tried to persuade the president to change his position on the issue.Bipartisan immigration talks had sounded promising until it was reported last week that Mr Trump had dubbed certain nations “shitholes” during legislative negotiations. As the White House and lawmakers feuded over who said what, prospects of a grand bargain on an issue that has bedevilled successive US administrations receded. Republican Senator Lindsey Graham and Democratic Senator Dick Durbin maintain a deal is still on the table. But the White House has declared it dead, leaving immigration out of the spending bill to be voted on by Friday.The thing about a game of chicken is knowing when to blink. Democrats and Republicans are again careening toward a government shutdown neither side really seems to want. The power dynamic here, however, is far from balanced. Republicans control both chambers of Congress.If they stick together, the House of Representatives can pass some sort of short-term solution without any Democratic support. Then Senate Democrats will have to decide whether they have the numbers to block the bill and force a shutdown - or if they should even try. If Democrats get six years’ worth of funding for low-income children’s healthcare — part of the proposed legislation to keep the government open for another month - is that enough? Will they pay a political price from their base for not going to the brink — and, perhaps, over — to get help for the undocumented immigrants who entered the US as children? At least so far, Democrats have been reluctant to risk a government shutdown to protect the hundreds of thousands of these “Dreamers”. And Republicans are too fractured to agree on much of anything at all. It’s a recipe for procrastination and another round of brinksmanship in just a few weeks’ time.Yes. In December, Congress passed a similar short-term bill to keep the government open until 19 January. The hope had been that Congress would have reached a deal on immigration by now. And this deal, if it passes, would only keep the government running until 16 February. The whole drama may be replayed in the coming weeks.