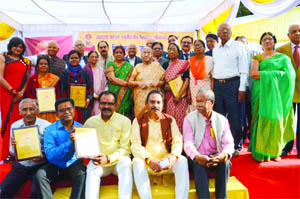 India the second biggest purchaser of petro crude from Iran has stopped buying it under the imposition of U.S. sanctions against it. The US Secretary of State Mr Mike Pompeo, who is on official visit to India has said that US has realized the difficulty of India and supplying the petroleum product by itself to meet the requirement of India. The US sanctions on Iran have become effective from November 4th 2012. Since then the India purchased the petro oil from America between November 2018 to May 2019, nearly 1,84,000 barrels per day. Last year the supply was 40,000 barrels per day. It is enhanced by 1,44,000 barrel per day. There is no oil crisis or shortage of petrol oils in India as US has stepped in to become alternate supplier of petro crude. Although US has imposed economic sanctions but it are really political and diplomatic sanctions. The last US President Mr Barak Obama and Iran signed an agreement on control of nuclear military power. But during his election campaign the President US President Mr Donald Trump declared that if elected he would scrap the US- Iran Nuclear Accord and he did it. Now Mr Trump wants Iran to negotiative and sign new nuclear accord. The Iran is not prepared for it consequently to put pressure the US has improsed economic sanctions on it asking the other nations not to buy petro crude from Iran. Like all other Arab nations the economy of Iran is also oil based. The sanctions have created economic difficulty. But politicaly the Rusia is not favour of US sanctions. Yet not the Iran is politically isolated nation and it is resisting US sanctions. The Iran has charged the US that by imposing economic sanctions, it had blocked the process of diplomatic moves and solution. The sanctions are in force November 2018 and in the 8 months time still there are no moves to settle the issue. Such grave international situation cannot prevail endlessily. Till now the sanctions have not succeeded in compelling situation to come to some accord to end the deadlock. Both US and Iran say they do not want war on this issue but the situation is moving in that direction and 4th Gulf war may erupt if not solved soon. So far US has carried out three Gulf wars. The first was when Iraq invaded and captured Kuwait and US in war against Iraq- Saddam liberated it from Iraqi occupation. The second was also on Iraq when US accused the Saddam regime of developing chemical weapons, which was denied by it but US invaded it and on alleged crimes and hanged him to death. The third Gulf war was when US invaded Libia in which the dictator Ruler Colonel Gadeffi was killed. The fourth gulf war is looming large in Iran if not diffiused well in time.