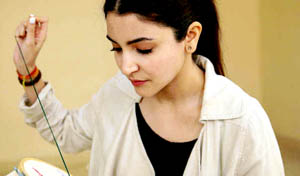 New Delhi, Bollywood actors Varun Dhavan and Anushka Sharma are all set to transform themselves for Yashraj films' next venture 'Sui Dhaaga-Made in India', a film that takes inspiration from Prime Minister Narendra Modi's 'Make in India' programme. The first poster of the film features Varun and Anushka in their transformed look as 'Mauji' and 'Mamta'.Officials in the Yashraj films said that the two actors have completely outdone themselves to get into the skin of their characters in Sui Dhaaga – Made in India. The two superstars are sporting never-seen-before looks in the film that is set in the heartland of India.Those in Yashraj films feel that their looks would certainly be a massive talking point given how authentic and perfect they are, on the basis of the milieu of the film. A film about finding love and respect through self-reliance, Varun and Anushka starrer 'Sui Dhaaga - Made in India' is a heart-warming story that is rooted in the Indian milieu and celebrates the spirit of self-reliance. The film’s plot is inspired by the hugely acclaimed Make In India campaign. Varun and Anushka have been paired for the first time .The National Award-winning, dream-team of director Sharat Kataria and producer Maneesh Sharma have taken the bar of perfectionism several notches higher with the looks they have crafted for their leading actors. 'Sui Dhaaga - Made in India' is set to release on September 28 this year, right before Gandhi Jayanti.Varun plays the role of a tailor and Anushka plays an embroiderer in the film.