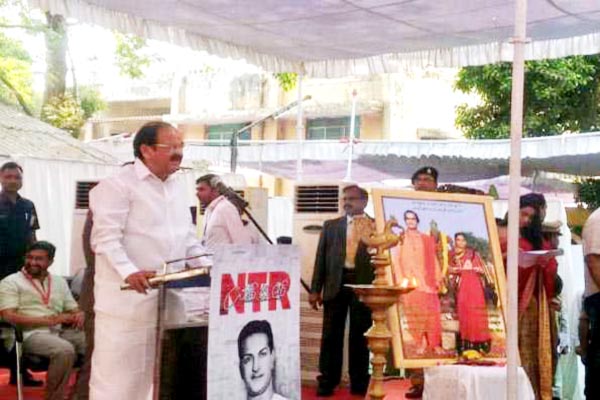 Hyderabad, At a colourful function attended by scores of film personalities in the sprawling NTR studios in Nacharam area of the city ,the shooting for the much-talked about biopic of matinee idol-turned- politician N.T.Rama Rao commenced,on Thursday. Vice President M.Venkaiah Naidu who was the chief guest clapped for the muhurat shot for the film which will depict NTR's early days,his achievements in southern film world and his foray into politics. Popular actor Balakrishna,who is the son of the late actor-politician and founder of the Telugu Desam Party (TDP) will don the title role.Director Teja will wield the mega phone. Speaking on the oocasion,Mr.Naidu said he always had a special regard and affection for NTR who constantly struggled to protect and present Telugu pride and greatness to the world. Balakrishna and other speakers too recalled the great qualities of heard and heart of NTR,who was considered as one of the pillars of Telugu filmdom.