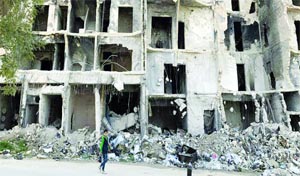 Agencies, United Nations The brutal conflict in Syria has not only claimed civilians as unintentional victims but has seen all warring parties deliberately target them with complete impunity employing unlawful methods of warfare, a new report by a United Nations-mandated inquiry on the war-ravaged country has said. Drawing from over 500 interviews, the latest report from of the Independent International Commission of Inquiry on Syria – established by the UN Human Rights Council to investigate and record all violations of international law since March 2011 – documents deliberate and indiscriminate attacks on civilians and protected objects, starvation, unlawful internment, and the use of chemical weapons. “It is beyond comprehension that, despite this extensive range of violations, Syrian victims and survivors continue to be denied any meaningful justice,” said Commission Chair Paulo Pinheiro. “Remedies which go beyond calls for criminal justice and address, for example, the situation of tens of thousands of detainees or account for those who have been disappeared or abducted must be given greater attention.” Looking into the period between July 2017 and January 2018, including the military campaigns against the Islamic State of Iraq and the Levant (ISIL/Da’esh) in Raqqa and Deir ez-Zor, the current report also revealed that while these offensives appear to have successfully dislodged the terrorist groups, the military success has come at an “extremely” high cost to civilians. Concerning eastern Ghouta, where the siege is entering its fifth year, the report highlighted an increasingly cynical means and methods of warfare, that have led to the worst documented cases of severe acute malnutrition over the course of the Syrian conflict, stated the report. The siege continues to be marked by indiscriminate attacks affecting civilian and protected objects, the use of chemical weapons and cluster munitions, starvation, and the routine denial of medical evacuations, added the Commission, noting also that terrorist or armed groups within the enclave continued to indiscriminately shell Damascus city, resulting in the deaths and severe injuries to civilians. Elsewhere across Syria, places of worship, civil defence centres, homes, medical facilities, markets, bakeries, and schools continue to be regularly attacked with impunity by warring parties. In one particularly harmful attack which took place on 13 November, the Commission of Inquiry found that the Russian Air Force carried out airstrikes on a densely populated civilian area in Atareb (Aleppo), killing at least 84 people and injuring another 150. “The use of unguided bombs, including blast weapons, in a densely civilian populated area may amount to the war crime of launching indiscriminate attacks resulting in death and injury to civilians,” stated the report. Underscoring the need for the international community to take a broader view of accountability, the Commission of Inquiry urged practical and urgent steps to ensure victims’ needs for justice and accountability are met both immediately and in the longer term. Recommendations also included the immediate release of children, women, the elderly, and disabled, and access by independent monitors to all places of detention, including those established by armed groups. Noting that there can be no justification for punishing a whole population through starvation, indiscriminate bombardment, and denial of medical and humanitarian relief, Commissioner Hanny Megally, said: “This whole conflict has been characterised by a total disregard for the rules of war.” “All parties must immediately lift all sieges, allow humanitarian access, and stop using strategies that primarily target civilians,” he added. In addition to Mr Pinheiro (Chair) and Mr Megally, the Commission of Inquiry also comprises Karen Koning AbuZayd. Its current report is scheduled to be discussed next week during an interactive dialogue at the 37th session of the Human Rights Council. Meanwhile, the Office for the Coordination of Humanitarian Affairs (OCHA) reported that Monday’s joint UN-Syrian Arab Red Crescent (SARC) humanitarian convoy was forced to cut short its delivery due to escalating violence and insecurity on the ground.