Vikas Yagya will continue, will cause people to flourish 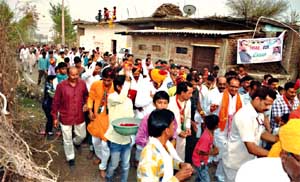 Chronicle Reporter, Bhopal, Chief Minister Shivraj Singh Chouhan on Friday had a direct dialogue with villagers in Balagaon and Khatyakhedi villages of Nasrullaganj tehsil in Sehore district at a Jan Samvad programme during Vikas Yatra. He said that this Vikas Yagya will continue. Not only will roads, bridges and culverts be made, the people will be made prosperous. He said that he wanted to draw such a line of public service that no one can erase. Procurement of gram, lentil, and mustard to continue till purchase completes CM Chouhan told villagers that incentive at the rate of Rs 200 per quintal has been deposited in the bank accounts of the farmers on wheat procurement of last year. This year Rs 265 per quintal incentive amount will be deposited in the accounts of farmers on wheat procurement by next June 10. State government will pay for the sweat of farmers with respect. He said that the work of procurement of gram, mustard and red lentils will continue in state. From next year onwards a separate set up along with additional team will be arranged. Giving information about other welfare schemes to the villagers Chouhan said that the government is working keeping ‘Sabka Saath-Sabka Vikas’ in mind. Development works worth Rs 473.86 crore to be undertaken in rural areas Chouhan dedicated Nasrullaganj-Borkheda Kalan road constructed at a cost of Rs 40 crore 35 lakh in Balagaon village and interior CC Road at a cost of Rs 3 lakh 66 thousand besides interior CC Road at a cost of Rs 3 lakh 27 thousand in Khatyakhedi village. Apart from this, he laid the foundation of Mandi-Balagaon roadway to be constructed at a cost of Rs 225 lakh 59 thousand, Krishak Sangoshti Bhavan of Nasrullaganj at a cost of Rs 200 lakh and CC Road of fruits-vegetable Mandi premises. District Minister in charge Rampal Singh, Chairman of Forest Development Corporation Guruprasad Sharma, Chairperson of Warehousing Corporation Rajendra Singh Rajput, Apex Bank Administrator Ramakant Bhargav, other public representatives and a large number of villagers were present during the programme.