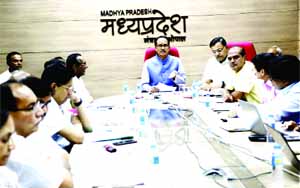 Chronicle Reporter, Bhopal Chief Minister Shivraj Singh Chouhan has said that Vikas Yatras will be set out in the state from May 15 to June 30. Benefits of various schemes will be provided to beneficiaries during the Vikas yatra. Besides this, development works will also be dedicated and foundation stone will be laid. CM Chouhan gave necessary directives to the senior field officers in this connection during the Samadhan Online programme held at Mantralaya today. He mentioned that development and public welfare is the main agenda of the state government. Therefore, efforts should be made at fast pace to provide benefits of various schemes to the eligible beneficiaries. He also redressed grievances of 12 applicants on the spot of various districts through Samadhan Online. CM Chouhan told the officers that procurement work of gram, red lentil and mustard on support price should be completed with utmost efficiency and proficiency. Farmers should not face any problem as regard to payment. Make wide arrangement for potable water supply and make water transport arrangement in the districts, wherever it is required. Chouhan informed that conventions of self-help groups will be organized on Ajivika Diwas in all the blocks on May 5 under the Gram Swaraj Abhiyan.

Labourers to be benefitted during Vikas Yatra

Chouhan mentioned that Asangathit Shramik Kalyan Yojana and Social Security scheme are ambitious programme. This should be organized with cooperation of all. List of applications received from the labourers should be read in gram sabhas to be held on May 7. Cards should be provided to eligible labourers after the reading. Chouhan further mentioned that benefit to the eligible labourers will be given from April 1 under the scheme. He instructed that benefits should be distributed to the labourers during the Vikas Yatra. Moreover, beneficiaries of various self-employment schemes should be benefitted by holding conventions in the month of July and August. Chief Secretary B.P. Singh has informed that a large campaign will be conducted to provide benefits to the beneficiaries of Asangathit Shramik Kalyan Yojana similar to the revenue campaign conducted in the past. CM Chouhan was apprised in the programme that Hemchand Kori of Hoshangabad has received the pending scholarship amount Rs. 28 thousand 600. Similarly, Smt. Uma Bai of Mandsaur has got the pending financial assistance of Rs. 4 lakh for death of his husband due to drowning. The complaint of Rakesh Prajapati of Indore for not receiving a cycle by his niece has been redressed by providing her the cycle. Bharat Shriwas of Chhattarpur has received an amount of Rs. 2 thousand 688 towards his tendu leaf remuneration. A letter is being written to the Union Government to take action against the Deputy Manager Sushri Pallavi Agrawal of Punjab National Bank, who is responsible for depositing the amount in the bank account of the applicant. Marks sheet of 10th class of open school has been given to Dariyasingh of Rajgarh. Payment of Rs. 2 lakh 37 thousand 762 has been made to Anand Singh Rajput of Harda against sale of moong to Krishi Upaj Mandi-Timarni. Similiarly, Ramdayal Yadav of Katni has got an amount of Rs. 31 thousand against sale of 20 quintal paddy. CM Chouhan gave instructions to pay the sum of Rs. 5 thousand to Shivnarayan Chouhan by imposing a penalty on the concerned police officer in connection to delay in renewal of weapon license. On the occasion, it was informed that arrangement has been made for action through superintendent of police by making changes in the weapon license renewal arrangement. There is no renewal case pending now due to this new arrangement. Moreover, it was informed that action has been taken to forfeit the security deposit of Rs. One lakh 500 of the concerned contractor and to ban him from the work for 2 years for delay in installation of permanent pump connection on the farm of Smt. Lilabai of Dindori. It was informed that temporary pump connection has been made available to her by taking action at departmental level under the maximum work limit. An amount of Rs. 4 lakh 83 thousand 735 has been paid to Sampat Prajapati towards rent. Offender clerk Brijendra Singh and accountant C.P. Paroha have been punished. Action is being taken against the culprit officers to recover Rs. One lakh 14 thousand 487 for wrong assessment in the case of Kapildhara Koop Nirman of Nanakraoji of Neemuch district. Delay was caused by the private ITI Kanavati in providing marks sheet to Sunil Kumar of Neemuch district. An action to make the marks sheet available to the applicant and to cancel the recognition of the institute for 2 years is underway. CM Chouhan presented citation letters to 10 officers, who have performed excellently under the Samadhan Ek Din Yojana. Chief Executive Officer –Seoni Smt. Suman Khatarkar, Tahsildar of Sohagpur (Shahdol) Manoj Chourasia, Block Co-ordinator of Seoni Sunil Kumar Pawar, Assistant Supply Officer –Bhopal Rajesh Khare, M.P. Shandilya, the authorized officer made by the Commissioner of Bhopal were awarded under the category ‘A’. Similarly, under the category ‘B’, Senior Agriculture Development Officer (Basoda) Vidisha A.S. Kourav, Nayab Tahsildar (Sarai) Singrauli Prabhas Kumar Bhargi, CEO Janpad Panchayat Pushparajgarh (Anuppur) R.P. Tripath, Senior Agriculture Officer Shayampur (Sehore) B.S. Dewra and Tahsildar Kumbhraj (Guna) Brij Mohan Arya were awarded with citation letters.