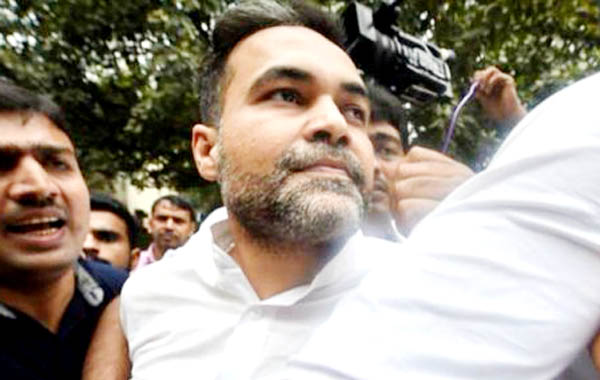 New Delhi, Metropolitan Magistrate Dharmender Singh on Friday granted bail to Ashish Pandey, the son of a Bahujan Samaj Party lawmaker, who was arrested for flashing his gun after a fight at an upscale hotel in the Capital. Pandey was seen in a mobile video with his gun and allegedly threatening a woman at Hyatt Regency on October 14, 2018, after a brawl. He and his friends were seen driving away in a BMW car and were neither stopped by the hotel staff nor by security. After several days on the run, Pandey surrendered in the Patiala House Court before duty Magistrate Neetu Sharma. An FIR No. 360/2018 under sections 25, 27, 59 of Arms Act against the accused was registered at Rama Krishna Puram Police Station. Police had accused the hotel authorities of a serious lapse. A show cause notice was issued to Hyatt Regency to explain within 15 days why the hotel did not inform the authorities concerned on October 14 about the brawl. Delhi Police, after investigation, filed a charge sheet before the court in the matter.Counsel for Pandey contended that he had been falsely implicated in the present FIR due to media trial. Defence further submitted that nothing more was required to be recovered from Ashish Pandey and he had always cooperated with the investigating agency and is ready to furnish the sound surety before the court if granted bail. Ashish Pandey was granted bail with the condition to furnish a personal bond of Rs 50,000 and a surety of the like amount.