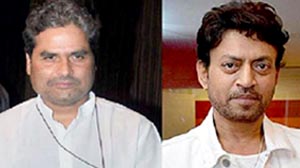 New Delhi, Filmmaker Vishal Bhardwaj on Monday announced rescheduling of his Irrfan Khan starrer, till the actor's return from abroad after recovery from his ailment. Expressing confidence that Irrfan will conquer his battle with the disease, Vishal in a tweet, said he and Prernaa of Kriarj have decided to reschedule the film till Irrfan's return. 'Irrfan is a warrior and we know he will conquer this battle. Therefore deepikapadukone, Prernaa kriarj and I have decided to reschedule our film and start with renewed energy and celebration when our warrior returns as a winner,'the filmmaker said in a tweet. The actor had on Friday revealed that he is suffering from NeuroEndocrine Tumour. In his statement on Twitter, the actor revealed that he is going out of the country to undergo treatment and hopes to return with new stories. 'The unexpected makes us grow, which is what the past few days have been about. Learning that I have been diagnosed with NeuroEndocrine Tumour as of now has admittedly been difficult, but the love and strength of those around me and that I found within me has brought me to a place of hope. The journey of this is taking me out of the country, and I request everyone to continue sending their wishes. As for the rumours that were floated NEURO is not always about the brain and googling is the easiest way to do research . To those who waited for my words, I hope to be back with more stories to tell,' the actor had tweeted.