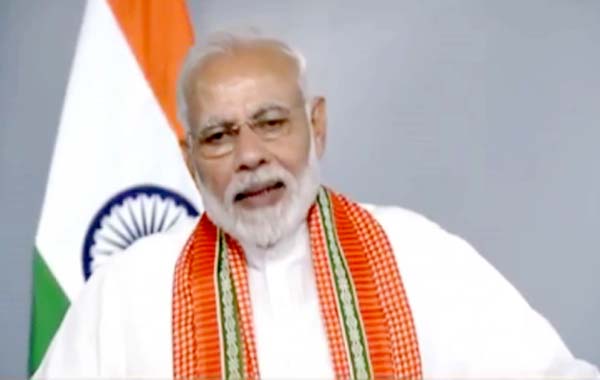 New Delhi, On the occasion of 19th anniversary of the infamous 9/11 terror strike against the United States, Prime Minister Narendra Modi on Tuesday said that Hindu monk Swami Vivekananda's teachings of tolerance and acceptance can fight global terror. Mr Modi also said that India is a country of 'free ideas' wherein democracy and debate are part of the eternal values. In his speech to the the valedictory function of the 125th Anniversary of Swami Vivekanand’s Chicago speech, organised by Sri Ramakrishna Math at Coimbatore through video conference, the Prime Minister said the major problems confronting the world today, including the disturbing terrorism, can be fought and resolved through the two features of teachings of Swami Vivekananda 'tolerance and acceptance'. "I must remind you that this day is also the anniversary of a very different kind of event – the terrorist attacks of 9/11 (in US in 2001) that echoed through the world. The community of nations is trying to find solutions to this problem, but truly, the solution lies in the path that Swamiji showed the world in Chicago – tolerance and acceptance," the Prime Minister said. Mr Modi quoted Swamiji of saying, “I am proud to belong to a religion which has taught the world both tolerance and universal acceptance and asserted that as a land India has been "a country of free ideas. For centuries, this land has been home to diverse ideas and cultures". "We have a tradition of discuss and decide. Democracy and Debate are our eternal values," Mr Modi said. Paying tributes to Swami Vivekananda - often hailed as being youth icon- the Prime Minister said while it was satisfactory that "today’s youth is marching ahead with a sense of mission", it is also a fact of the matter that despite education "even after 70 years of freedom, many of our young people lack the skills to make them employable". Against this backdrop, Mr Modi lamented that the country's educational system "has not given" enough emphasis to skills. "Keeping in mind the aspirations of the youth, the Government is bringing a new work culture and a new approach," he said, adding that recognising the importance of skill development for youth, his government has created a dedicated Ministry for Skill Development. "Besides, our government has opened the doors of the banks for youth who want to achieve their dreams on their own. Under the Mudra scheme more than 13 crore loans have been given so far. This scheme is playing a significant role in enhancing self-employment in the villages and towns of the country," he said. The Government is also providing an encouraging platform for Innovative Ideas under the Start Up India Campaign, Prime Minister said and also pointed out that as a result, 8000 Start Ups received Recognition Certificate last year alone as compared to around 800 in 2016. It means a ten fold increase in one year, the Prime Minister said.He further said to create an atmosphere of innovation in schools, the “Atal Innovation Mission” has been launched.Under this scheme we are working towards establishing 5000 Atal Tinkering Labs across the country in the next 5 years.