We acquired flexibility that acting needs, thanks to Udaan, say serial’s star cast 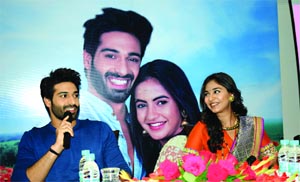 Chronicle Reporter, Bhopal The Social drama ‘Udaan’ which is aired on Colors five-days in a week, has ruled the chart through its engaging narrative. The story that started with Chakor (Meera Deosthale), a seven-year old’s dream to be free, has culminated into an intense saga. Currently, Udann has taken the mantle forward with a leap where Chakor and Sooraj are fighting the issue of “maansik bandhua” in Azadganj. To tell about the upcoming storyline of the show and to share their experience, Vijayendra Kumeria (Sooraj) and Vidhi Pandya (Imli) visited Bhopal on Wednesday. Speaking about the experience of essaying the role of Sooraj, Vijayendra Kumeria said, “The character of Sooraj has seen a major transformation, from a negative, revenge seeking boy, he has now evolved into a man who endorses his wife’s fight for the right.” Adding further he said, “I’m extremely fortunate to be able to play the character of Sooraj. Not only have I been able to learn the nuances of what an antagonist needs, I’ve been fortunate to acquire the flexibility that acting needs, thanks to Udaan.” Adding to his personal life the actor said he never thought of becoming an actor, he wanted to become Chartered Accountant (CA), but he joined aviation industry and worked there for three years, after which he took break from his work and thought of doing acting as he always had an inclination towards drama and acting. Further he added, he wishes he could work one day opposite to Deepika Padukone. Talking about the show, Vidhi Pandya said, “Playing Imli has definitely been challenging but also overwhelming. While I enjoyed portraying an innocent girl it was thrilling to transform into a person who now has negative intentions and whose actions create massive chaos in the life of her own sister. For me, on the personal front, Udaan has not only given me recognition and fame but it has most importantly given me a foundation that I will always be thankful for.” Adding to her personal life Vidhi said, I’m a peppy girl, fun loving person who loves to travel, recently I have explored Ooty. I never thought of coming in the entertainment industry but I have few friends who belong to the same industry as I’m born and brought up in Mumbai. Things for me were designed by my destiny.” Telling about the inspirational role, she said, “I really got inspired from the characters of Alia Bhatt which she portrayed in Highway and Udta Punjab. I wish to act opposite Shah Rukh Khan and want to act for Imtiaz Ali or Sanjay Leela Bhansali.”