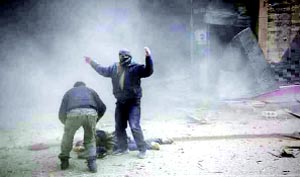 Agencies, United Nations The scale of suffering across Syria has reached unprecedented levels, with access to aid blocked in three major population centres, growing displacement and more than 13 million people in need across the country, the UN has said. The organisation called on Tuesday for a one-month ceasefire to ease what it described as an “extreme situation” that “we haven’t seen before” at any point during the war, which is soon to enter its eighth year. The conflict has been marked by a mass exodus of Syrian citizens, sieges, starvation and a death toll that surpassed 500,000 people in 2016. The UN’s assistant secretary general and humanitarian coordinator in Syria, Panos Moumtzis, said the organisation had been almost powerless to respond to a “dramatic deterioration in the humanitarian situation” over the past two months in particular, when access to people in opposition areas had been blocked by Syrian government officials. The siege had been most acute in East Ghouta on the outskirts of Damascus, where 400,000 people – 94% of all those under regime blockade – have not received deliveries of food, water or medicine since late November. Ghouta, an opposition stronghold throughout the conflict, has been heavily bombed by Russian and Syrian jets for the past month, as both allies attempt to press home their recent gains elsewhere. Up to 88 civilians were killed by airstrikes on Monday and Tuesday alone, local medics and activists said, as a campaign to break resolve in remaining opposition areas continued unabated. Elsewhere, airstrikes continued to hammer Idlib province in northern Syria, where more than 2 million people, at least half of them displaced from other parts of the country, are hemmed in near the Turkish border. Russian jets are attacking them from above while Iranian-led ground forces squeeze them from the south. The city of Afrin in northern Idlib was attacked last month by the Turkish military and an Arab proxy force, adding a new layer of complexity to a war in which alliances have shifted and internal dynamics have splintered attempts to provide a united opposition front against the Assad regime. All the while, international powers have increasingly tried to shape the outcome of the war in their own interests, while mounting humanitarian needs across the province have routinely gone unmet. At least 300,000 people have been displaced in Idlib since mid-December, when the most recent regime push on the area began. Almost half the area’s current population have been displaced from elsewhere in Syria; some were relocated as part of what Syrian officials call locally negotiated ceasefires, but which have nearly always followed long, crippling blockades. Idlib also contains large numbers of jihadist fighters who control much of the province. Jihadist and conservative Islamist groups have besieged two Shia towns near Aleppo for much of the past three years. Their presence has been used by Syrian and Russian officials to claim that any genuine anti-Assad opposition was fleeting and has long been subsumed by a global jihadist agenda. “They have stuck to this line for the past five years,” said Manaf Khaled, a businessman from the town of Zabadani, near Damascus, who was relocated to Idlib last September. “When we came here, it was the first time we saw them. Now they want to tell the world that we are all like them. It is a dangerous trap and people must know this.” The UN said that in 2017 only 27% of its requests for access to opposition areas were granted by the Syrian government. As the military offensives have continued in Ghouta and Idlib, not a single request has been granted so far this year. Idlib was supposed to be a de-escalation zone, where hostilities were slowed or stopped to pave the way for negotiations. “There is a misperception that the de-escalation areas have resulted in peace and stability. If anything, these have been serious escalation areas,” said Moumtzis, who renewed a call for a political response to the crisis. “We feel really outraged. Dramatic developments have been building up and it has reached a point where we can no longer stay silent. These are multiple fires we have to respond to, with a dramatic deterioration in many places.” Moumtzis said a perception that the Syrian war was winding down had probably reduced impetus towards a political solution to the crisis, which had remained elusive despite three separate peace processes, in Geneva, Astana and most recently the Russian town of Sochi. The UN-backed Geneva process is largely moribund, having achieved little in more than a dozen meetings. Russia’s attempts to take the lead by holding the Sochi summit also ended in failure, with an ascendant Syrian regime, heavily backed by Iran and Russia, not willing to make concessions while conditions on the battlefield remain in its favour. Alaa al-Ahmad, 27, from East Ghouta, said: “Even throughout Sochi the regime committed massacres; even as we speak they’re committing massive crimes. We are surprised that another conference is being set for next month. Can’t they see it is being built upon ours and our children’s blood?”