We shouldn’t discriminate against any section of society: Bhaiji 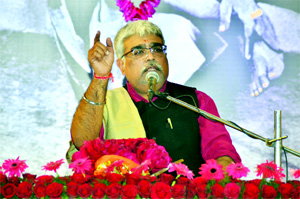 Chronicle Reporter, Bhopal On the second day of Sri Sai Amrit Katha, Sumit Ponda ‘Bhaiji’ said that we should not discriminate against any section of the society. He said all creatures are the creation of God. In this direction the members of kinnar community were invited on th second day on Friday. Bhaiji said the kinnars have the blessing of Shri Ram. Therefore their prayers have so much impact, Bhaiji said. Bhaiji said Sai Baba did not believe in observing fast. He gave scientific and practical reasons behind various religious activities. Bhaiji said Baba accepted alms from five houses although he could get everything from God. He said the devotees should be aware of fake Babas who mislead people by claiming they are ‘avtars’ of God. Bhaiji said one should not be afraid of God. Rather one should love God and there should be feeling of love in devotion. Earlier on the first day of Sai Amrit Katha, ‘Bhaiji’ said that helping and serving others is like devotion to God and Sai always inspired his followers to help others. He himself set the example by serving the sick. Bhaiji also donated blood before starting Sai’s katha and began the katha soon after donating blood. He gave the message that donating blood does not lead to weakness. This year Sri Sai Amrit Katha Samiti has decided that one work of social service will also be done on all five days when katha will be recited. On the second day representatives of Kinnar community will be invited for Katha and initiative will be taken to bring them to the society’s mainstream. Speaking about the importance of Shirdi, Bhaiji explained how Shildhi was named Shirdi. Bhaiji said today people go to Shirdi and ask something from Baba. Instead they should wish that Baba should always stay with them because if Baba is with them then everything is with them. Instead of wasting time on other things, they should focus only on Baba. On the first day of katha, people also enjoyed the melodious bhajans of Sai Baba.