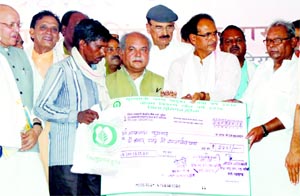 Chronicle Reporter, Bhopal, Chief Minister Shivraj Singh Chouhan said that the Mukhya Mantri Jan-Kalyan Yojana “Sambal” has been started for the welfare of the poor. In this, efforts have been made to provide social security cover to the general public. Welfare of the poor have been given topmost priority. The Chief Minister was addressing a joint conference of Morena-Bhind in Khajuri village of Ambah tehsil in Morena district. Chief Minister Chouhan and Union Minister of Rural Development, Panchayati Raj and Mining Narendra Singh Tomar dedicated and performed bhoomi-pujan of development works worth Rs 36 crore 89 lakh. CM Chouhan distributed assistance of over Rs 20 crores and other material under various schemes to 76 thousand 813 beneficiaries of Morena-Bhind. District in charge Minister of Morena Narayan Singh Kushwaha, Public Health and Family Welfare Minister Rustum Singh, Minister of State for General Administration Lal Singh Arya, Morena MP Anup Mishra, Bhind MP Dr. Bhagirath Prasad, other public representatives and a large number of citizens of Bhind-Morena were present at the conference. CM Chouhan said that no person will remain without land or house by year 2022 in state. He said that there are nearly 37.5 lakh homeless families in the state. Nearly 40 lakh houses will be constructed for these families by year 2022. He said that state government will construct 10 lakh houses every year. CM Chouhan said that what we have done in state has never been done anywhere in the world. He said we are not only purchasing wheat, paddy, gram etc but are also giving incentive on these crops to the farmers. He said that electricity will be provided at a flat rate of Rs 200 per month to beneficiaries of Jan-kalyan Yojana from July onwards. The CM said that we have to end the thinking that the children of labourers will remain labourers. Children of the poor are being educated so that they too can reach high posts on the basis of their talent. Government will pay the fees for Class I to PhD for children of the poor. CM Chouhan said that the people belonging to Bhind-Morena region have brought glory to the country at the country’s borders. He said that every poor person has been given free treatment facility under Pradhan Mantri Ayushman Bharat Yojana,Mukhya Mantri Swechhanudan and State Illness Assistnace Fund. He said that tendu patta collectors are being provided the additional facility of charan padukas, water bottles and sarees to the women collectors. Union Minister Narendra Singh Tomar said that maximum number of development works and public welfare schemes are being run in Madhya Pradesh compared to other states. He said that provision of Rs 14 lakh crores has been made in the budget for country’s rural development. This has not been done by any other government. Tomar said that the state government has increased irrigation rakba to 40 lakh hectare from 7 lakh hectare. Along with this water has been provided up to Bhind through Chambal canal which is an exemplary initiative. MP Anup Mishra also addressed the conference.