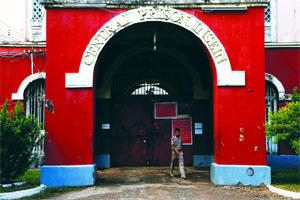 Agencies, Yangon Hundreds of political prisoners have been released from Myanmar’s jails in amnesties in recent years, including dozens freed in January 2016, days before democracy champion Aung San Suu Kyi’s party took power for the first time. Former President Barack Obama announced the lifting of U.S. sanctions in October 2016, citing the release of political prisoners and improved human rights as well as the elections that brought Suu Kyi to power. Suu Kyi herself had been under house arrest for 15 years before being released in 2010. Prison reform, however, has been put on the back burner under the new government. A new prison law was discussed in parliament in 2015, but was not passed. It has not been taken up since then by a new set of lawmakers - most of them from Suu Kyi’s National League for Democracy (NLD) - who took their seats in early 2016. The Assistance Association for Political Prisoners (AAPP), a Myanmar group formed by former detainees, says prison reform should include repealing a law that gives police broad powers of arrest and pre-trial detention. The AAPP advocates overhauling vague or outdated rules in the Jail Manual and Penal Code, much of it written during British colonial rule. But the AAPP and rights groups caution that any new legislation on prison reform would not stop politically motivated prosecutions, which would need to be addressed with specific judicial and legal reforms. Suu Kyi’s government pardoned, released or dropped charges against hundreds of political prisoners in the month after it took office. But today, 46 people are serving prison sentences for political activities, and another 52 political prisoners are in jail awaiting trial, the AAPP says. OTHER PRIORITIES NLD Party spokesman Aung Shin told Reuters prison reform was not yet on the legislative agenda because of other priorities.“There are so many things to do as MPs, it may be a part of the reasons for not including prison reform in the parliament discussions,” Aung Shin said. He also said, however, prisons should be part of a broader examination of legal and judicial reform that the party and legislature was planning. He did not give a time frame for any contemplated legislation. AAPP says that 120 former political prisoners from the NLD party are members of the national parliament or regional assemblies. “There are so many former political prisoners in the NLD party, and even in the current parliament,” said Aung Myo Kyaw, head of AAPP’s Yangon office. “It’s sad they aren’t considering this issue.” The military did not respond to requests for comment. The home affairs ministry says it has improved prison conditions across the country. A ministry report in March said the Correctional Department had relaxed rules on family visits and improved education programs.