Wholesale inflation in February eases to 2.48 per cent 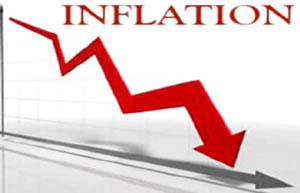 New Delhi, The annual rate of inflation, based on monthly Wholesale Price Index (WPI), eased marginally at 2.48 per cent from 2.84 percent in the previous month, data released by Commerce and Industry Ministry said on Wednesday. The WPI inflation in February 2017 was more than double at 5.1 per cent, the data showed.The WPI index was eased in the month of February on lower food, vegetable, and fuel prices. The February WPI food inflation was recorded at 0.07% as compared to 1.65% in January, while the WPI fuel and power inflation were recorded 3.81% as compared to 4.08% in January. Build up inflation rate in the financial year so far was 2.30 per cent compared to a build up rate of 4.92 per cent in the corresponding period of the previous year. According to the Commerce Ministry data, wholesale inflation data follows the retail inflation figures for February released on Tuesday which showed a slight cooling in the consumer price-indexed (CPI) inflation at 4.4 per cent on the back of lower food and fuel prices.