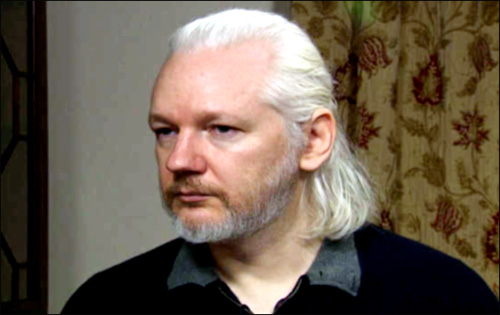 London, Wikileaks co-founder Julian Assange was sentenced on Wednesday to 50 weeks in a British prison for breaching his bail by entering the Ecuadorian embassy. His sentencing comes a day before an extradition hearing in London related to separate charges in the United States for conspiring to hack a government password, according to Washington Post's report. Assange, 47 was found guilty of breaching the Bail Act last month after his arrest at the Ecuadorian Embassy. He took refuge in the London embassy in 2012 to avoid extradition to Sweden over sexual assault allegations, which he has denied. At the trial, his lawyer Mark Summers argued that Assange failed to surrender to a British court seven year ago and so violated his bail because he had a reasonable fear that if he were extradited to Sweden he would be extradited to the United States and even onward to Guantanamo Bay. Assange further feared “kidnap by the United States” and was “living under overwhelming fear of rendition,” Summers told the court. “It matters little whether his fears were reasonable or unreasonable,” he added, suggesting that those fears were in fact reasonable. Summers then read aloud a handwritten letter in which Assange wrote “I apologize unreservedly” for seeking refuge at the embassy. “I found myself struggling with terrifying circumstances,” Assange wrote. “I did what I thought at the time was the best and only solution” His lawyer described Assange’s almost seven years in the Ecuador Embassy as a virtual incarceration, in cramped housing, no access to a courtyard or garden, under constant monitoring — “circumstances of pain and oppression.” “He was a desperate man,” Summers said. The whistle-blowing website Wikileaks has published thousands of classified documents covering everything from the film industry to national security and war.