Will Jyotiraditya be able to break Shivraj’s charisma? 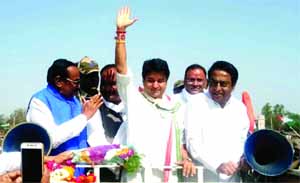 Chronicle Reporter, Bhopal The curtain descended at 1700 hrs today on the din and bustle of campaigning in two assembly constituencies – Shivpuri’s Kolaras and Ashoknagar’s Mungaoli – of Madhya Pradesh that are scheduled to witness polling from 0800 to 1700 hrs on Saturday amid tight security. But the moot question is: Will Jyotiraditya Scindia be able to break the magic of Shivraj? The Kolaras and Mungaoli seats have become presige issue for both Congress and BJP. On the one hand Chief Minister Shivraj Singh Chouhan himself is spearheading the campaign for BJP, on the other the possible CM face and former minister Jyotiraditya Scindia leads the campaign for Congress.

On the last day of campaigning, bigwigs from both ruling Bharatiya Janata Party (BJP) and the principal-opposition Congress held a number of public meetings to woo the electorate. For the BJP, Chief Minister Shivraj Singh Chouhan and several cabinet ministers canvassed votes. Senior Congress leaders Jyotiraditya Scindia, Kamal Nath, Kanti Lal Bhuria, Arun Yadav and Suresh Pachouri joined the campaign trail. A chase of votes would continue albeit through door-to-door campaigning. Counting of votes would take place on February 28 A total of 2,44,456 voters, including 1,13,753 women would seal the fate of a total of 22 nominees in Kolaras at 311 polling centres. On the other hand, 1,91,009 voters, including 88,933 women, would determine the fortunes of 13 candidates in Mungaoli at 264 polling centres. VVPAT (Voter Verified Paper Audit trail) would be used in both the by-elections. Nonetheless, it is a two-horse race between the ruling Bharatiya Janata Party (BJP) and the principal-opposition Congress in both the constituencies. BJP candidate Devendra Jain, a former legislator, is locked in a combat with Congress nominee Mahendra Singh Yadav in Kolaras where the by-election has been necessitated by the demise of sitting Congress legislator Ram Singh Yadav. Likewise, Congress legislator Mahendra Singh Kalukheda’s demise necessitated the by-poll in Mungaoli where the BJP’s Baisaab Yadav is taking on Congress’ Brajendra Singh Yadav. Hoping to get lion’s share of votes, aspirants and their campaigners crisscrossed the breadth and length of the constituencies in the past few weeks that witnessed intense campaigning by the BJP and the Congress. Both the parties are viewing it as a semi-final before the state assembly elections proposed to be held by this year end.

Challenge is greater for the Congress

The challenge is greater for the Congress as it held both the seats before it were vacated due to the demise of sitting party legislators. The two seats are also considered as former Union minister and Congress MP Jyotiraditya Scindia’s home turfs. The saffron party is striving to wrest at least one seat from the Congress.Instead of candidates, the by-election has assumed more significance for Mr Chouhan and Mr Scindia as the leader duo are considering it as a prestige issue.

In fact, the by-elections are crucial in the sense that it could determine the future political course for Mr Scindia in Madhya Pradesh. Several Congress leaders are demanding that Mr Scindia be projected as a chief ministerial candidate to counter Mr Chouhan. On the other hand, other Congress bigwigs – including Leader of the Opposition Ajay Singh, state Congress chief Arun Yadav and Congress’ state Incharge General Secretary Deepak Babria – favour sticking to the party tradition of not declaring a chief ministerial candidate. A significant development in Mungaoli took place when Ashoknagar Collector BS Jamod was removed on the directives of the Election Commission of India after complaints by the Congress with regards to discrepancies in voters’ list were found to be true.