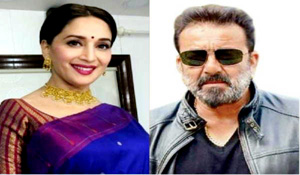 New Delhi, As the anticipation over Sanjay Dutt's biopic peaks, the makers are planning to host a grand premiere for the upcoming Rajkumar Hirani directorial 'Sanju'. The special screening of 'Sanju' is expected to be a starry affair with Bollywood's who's who attending the much-awaited premiere on June 29. While Bollywood celebrities are anticipating the screening of the prolific filmmaker's next venture, speculation is rife on whether Madhuri Dixit Nene will attend the screening of the film. 'Sanju' depicts the life of Sanjay Dutt right from his younger days to his conviction in the 1993 serial blasts case. While Sanjay's life, time and again made headlines, a lot of unbelievable aspects of the actor's life yet remain untold. Rajkumar Hirani's 'Sanju' promises to bring to the forefront the unabashed details of the actor's life unfiltered highlighting aspects like drugs, women, relationship with parents and friends, and inner conflicts. The recently-released trailer of 'Sanju' has taken the excitement of the audience to an all-time high owing to the gripping storyline and power-packed performances by the ensemble cast. Written and directed by Rajkumar Hirani, the film also stars an ensemble cast in addition to Ranbir Kapoor which includes Paresh Rawal, Manisha Koirala, Vicky Kaushal, Sonam Kapoor and Dia Mirza among others. Produced by Vinod Chopra Films and Rajkumar Hirani Films in association with Fox Star Studios, 'Sanju' is all set to be released on June 29.