Will not let PM rest till farm loans are waived: Rahul 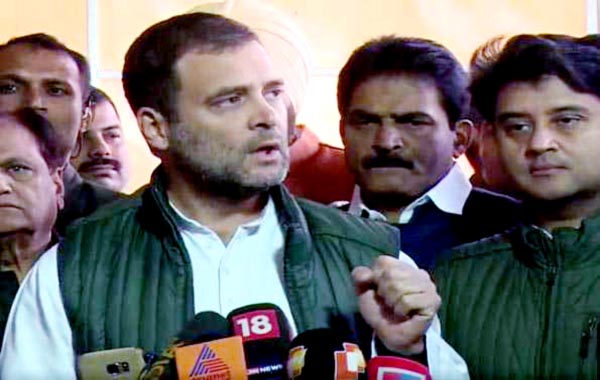 Agencies, New Delhi, Charging the Narendra modi Government with waiving loans worth Rs 3.5 lakh crore of his industrialists friends by taking money from the pockets of the poor, farmers and small shopkeepers, Congress president Rahul Gandhi on Tuesday said that the Congress and other opposition parties will not allow the Prime Minister and the NDA Government to rest till the loans of farmers across the country are waived. Talking to reporters here, Mr Gandhi said, ‘We had promised that we would waive off the loans of farmers in Rajasthan, Madhya Pradesh and Chhattisgarh in ten days. In two states, it has been done within six hours of assuming power and in the third state it is about to happen. ‘In the last four and a half years, Modiji has waived off Rs 3.5 lakh crore of 15 to 20 industrialists but not a single rupee of loans of farmers has been waived off. The Congress and other opposition parties will force the Narendra Modi government to waive off loans of farmers.. We will stick to our ground and not allow them to rest till they accede to demands of farmers for farm loan waiver.’ He said that the Congress would ensure that the voice of the farmers of the country reaches the Government. ‘To farmers I want to say that this country belongs to you and not 15 to 20 industrialists. You toil through the day but your voice does not reach the Government. We are ensuring that your voice reaches to the Government.’’ Continuing an attack on the NDA Government on the Rafale deal, he said, ‘Modiji has waived 3.5 lakh crores of industrialists of which 45000 crore belongs to Anil Ambani. In this amount, farm loans of Rajasthan, Madhya Pradesh and Chhattisgarh all together can be waived. You have waived off the loan of industrialists by indulging in corruption in the Rafale deal. An inquiry will be carried out into the deal by the JPC.. Why is the PM running away from a debate on Rafale.’ On the Government claims that there were typo errors in Government affidavit in the Supreme court, he said ,’’ very soon typo errors will be witnessed in demonetisation, farm loans waivers and in the JPC.’’ Attacking the Government on Demonetisation, Mr Gandhi called it the biggest scam. He said,’’basically they are stealing money from farmers, and the general public. Money has been snatched from small shopkeepers . The aim of demonetisation was to snatch money from poor and put in pocket of Modiji’s industrialist friends and people like Jay shah.’’ Asked whether the Modi Government did not waive loans, Congress would do if it comes to power in 2019, Mr Gandhi said,’’Yes, we will waive off loans of farmers immediately after coming to power like we have done in case of Madhya Pradesh and Chhattisgarh.’’