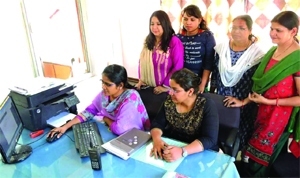 Chronicle Reporter, Bhopal A power company of Indore in Madhya Pradesh has made the first all-women’s zone with all women employees. Not only this, these women have been entrusted the responsibility to make 24-hour power supply available to a population of 60 thousand in the area. Madhya Pradesh Paschim Kshetra Vidyut Vitaran Company has formed a unique power zone in Aranya Nagar in Indore on the occasion of Women’s Day. All 25 employees in this zone office are women. These women have already taken charge in the zone. This is the country’s first power zone that has been initiated in the honour of women on International Women’s Day. Work including bill making, meter reading, bill submission and recovery, cutting and resuming connection, redressal of complaints, new connections, transformer, line maintenance and primary repair work etc. of Aranya Nagar are being undertaken by women. Aranya Nagar has been chosen for this creative initiative as there is not much settlement in new Indore. Sushri Bhagyashri Dagoud has been appointed as Assistant Engineer while Sushri Anshika Khare has been posted as Junior Engineer. Besides for all other work is being undertaken by women. The zone headquarter has been given a pink aura. Apart from this, engineers and fuse call attendants will move in pink coloured vehicles. Power is supplied to 60 thousand population from total 12 feeders in the zone. There are nearly 13 thousand power connections and more than 200 transformers. Power is supplied from total six grids to the zone.