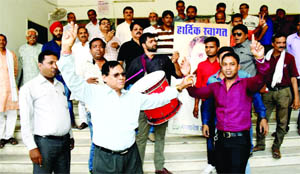 Chronicle Reporter, Bhopal Soon after becoming party state president, Kamal Nath targeted the state government. He said it is for the first time that the debt-ridden farmer is forced to commit suicide. Nath said the people of the state now want a change. He said all workers should come forward and work unitedly. Nath also tweeted to express his gratitude towards the top leadership. In a tweet, Nath thanked Sonia and Rahul Gandhi and said he would fulfill his responsibility with diligence. Party workers celebrated after news of Nath’s appointment as state president arrived. Workers burst crackers at MPCC headquarters and distributed sweets. Senior leader Ajay Singh also congratulated Kamal Nath and Jyotiraditya Scindia. The appointment of Kamal Nath as PCC president comes close on the heels of completion of former chief minister and AICC General Secretary Digvijaya Singh’s Narmada Yatra on April 9. While the Congress has not yet announced a chief ministerial candidate for the Assembly polls, Kamal Nath’s appointment as PCC chief would make him a front-runner for the post if the party comes to power. In a bid to thwart Scindia’s ambitions, AICC General Secretary Digvijaya Singh has thrown his weight behind Kamal Nath- who he often describes as his ‘elder brother’.