Work being carried out by tribal women is symbol of women empowerment: CM 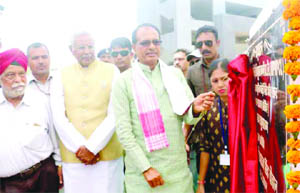 Government to bear 3 percent interest on loan of Tribal women

Chronicle Reporter, Bhopal Chief Minister Shivraj Singh Chouhan dedicated pellet feed plant in village Kiratpur of Kesla block of Hoshangabad district today. Chouhan told that a remarkable work of poultry farming is being carried out by tribal women groups in Kesla, Sukhtawa and Bhoura. These women of groups have shown how to win by fighting poverty. There was lack of roads, electricity and water earlier. Today, we have laid road network at every place. People of the state are getting 24 hours electricity now. Chouhan said that the state government has expanded the irrigation capacity from 7 lakh 50 thousand hectare to 40 lakh hectare. He mentioned that “Gharibi Mitao, Gharibon ko Upar Lao” (Poverty eradication and progress of poor) is the priority of the government. He stated that the government is making resources available to persons, who do not possess resources. Nobody will remain without house now. A campaign to provide pattas is being conducted. Houses will be provided to all the eligible poor during the next 4 years. Moreover, Chouhan stated that work for registration of labourers of the unorganized sector has been carried out. Labourers will be benefitted with several government schemes after the registration. Fee for education of labourers’ children from class 1 to PhD. will be borne by the government. Free medical treatment will be provided to the labourers. An amount of Rs. 2 lakh will be given to the family, in case of death of labourer. Moreover, in case of accidental death of labourer then a sum of Rs. 4 lakh will be given. In addition to this, a sum of Rs. 5 thousand will be given to perform final funeral rites. The Chief Minister said that we will improve standard of living of the people living below the poverty line. He mentioned that Kesla, Bhoura and Sukhtawa are model for people because tribal women of this area are symbol of women empowerment and poverty alleviation. Chief Minister assured that income of women of this place will be increased; arrangements will be made to provide them market. Along with this, every possible help will be rendered to societies, which are engaged in poultry farming activities. He further said that women are also manufacturing papad, achaar and badi (Nuggets) at other places. They too have main goal of poverty eradication and the state government will provide all assistance to remove poverty. Felicitating all the office bearers of MPW PCL, Chouhan mentioned that he will gather information on chicken breeding soon from these office bearers by holding a meeting with tribal women through video conferencing. Speaker of Vidhan Sabha Dr. Sitasharan Sharma has said that chicken breeding has become a medium of employment and economic progress in this area. All the tribal families are moving on the path of economic progress. MLAs Sartaj Singh, Vijaypal Singh, Thakur Das Nagvanshi, Member of State Antodaya Committee Harishankar Jaiswal, President of Itarsi Municipality Smt. Sudha Agrawal, President of MPW PCL Smt. Saroj Bai, President of Kesla Poultry Society Smt. Kunti Bai Dhurve Public Representatives and members of poultry farming society were present on the occasion.