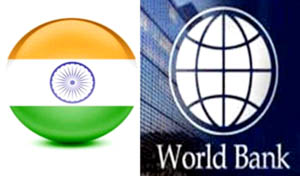 New Delhi, The World Bank has projected India’s Gross Domestic Product (GDP) growth rate at 7.3 and 7.5 per cent in the year 2018-19 and 2019-20 respectively. In its India Development update released here on Wednesday, World Bank said that Indian economy is set to revert to its trend growth rate of 7.5 percent in the coming years as it bottoms out from the impact of the Goods and Services Tax (GST) and demonetisation. Releasing the report at a press conference Junaid Ahmad, World Bank Country Director in India said that India’s GDP growth saw a temporary dip in the last two quarters of 2016-17 and the first quarter of 2017-18 due to demonetization and disruptions surrounding the initial implementation of GST. He further said that economic activity has begun to stabilize since August 2017. India’s GDP growth is projected to reach 6.7 percent in 2017-18 and accelerate to 7.3 percent and 7.5 percent in 2018-19 and 2019-20 respectively. On growth issue Mr Ahmad said, “India’s long-term growth has become more steady, stable, diversified and resilient. In the long-run, for higher growth to be sustainable and inclusive, India needs to use land and water, which are increasingly becoming scarce resources, more productively, make growth more inclusive, and strengthen its public sector to meet the challenges of a fast growing, globalizing and increasingly middle-class economy. According to the report, while services will continue to remain the main driver of economic growth; industrial activity is poised to grow, with manufacturing expected to accelerate following the implementation of the GST, and agriculture will likely grow at its long-term average growth rate. It added that India’s growth in recent years has been supported by prudent macroeconomic policy: a new inflation targeting framework, energy subsidy reforms, fiscal consolidation, higher quality of public expenditure and a stable balance of payment situation. In addition, recent policy reforms have helped India improve the business environment, ease inflows of foreign direct investment (FDI) and improve credit behavior.